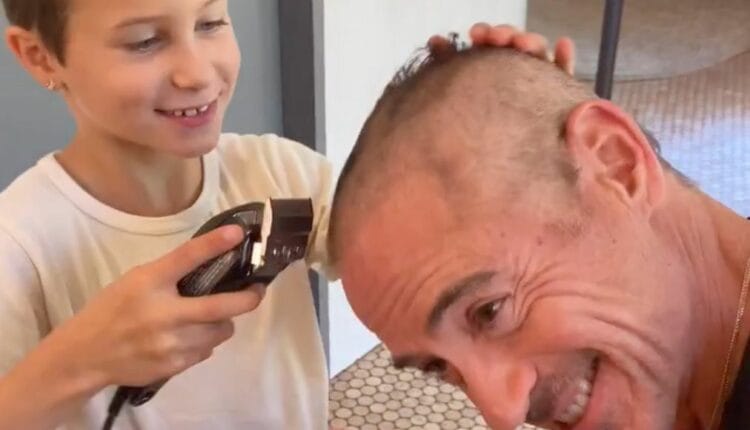 Robert Downey Jr. Sports A New Bald Look As He Attends The 2022

Robert Downey Jr. aka Tony Stark has recently gone viral after he shares some rare clips of his children helping him with his upcoming projects. Robert, who is one of the popular Hollywood stars and has given massive hits over the years, is preparing for an upcoming project.

It seems like his children are already there to support him in his next role. In a video posted by Robert, we came to realize that gave his kids a particular part in helping him prepare for his next project.

Robert, 57, released a video where it is seen that his two children Avri, 7, and son Exton, 10, shaved his head. The video gets coral within a few minutes and fans seemed to enjoy whatever the video displayed.

According to the report, Robert Downey Jr. is working on an upcoming project, The Sympathizer, and the decision of shaving his head is inspired by the decision.

Over the weekend, the actor, 57, gave a rare glimpse at his two younger children, daughter Avri, 7, and son Exton, 10, as he documented the experience of having his kids shave his head for his upcoming project, The Sympathizer.

In a video, Downey Jr. enters the room where his kids were carving pumpkins, “Sorry to interrupt but I need your help,”

“You know how I’m starting this project soon?”

“Yeah, The Sympathizer?” says Avri, as Exton adds, “Yeah, you’re playing like five roles or something.”

“Right. Well anyway, I don’t want to wear a bald cap, so will you guys shave my head?” he asks his children, who look up in confusion.

Avri smirked and said, “Is that even appropriate?”

Soon, we saw that Robert’s head was fully shaved and said, “Great job guys. I’ll let you get back to your pumpkin carving but what do I owe ya?”

Robert and his wife Susan Downey shared two kids and in a video, we see that they two whisper to one another and Exton says, “Keep your money, Avri’s got a better idea,”

Later, Avri told his father saying, “I need help with a Halloween project,”

Then, Avri transforms his dad’s head into a pumpkin, making everyone crack up. She makes sure to paint the head perfectly with the pumpkin shape so that his head can go along nicely.

Avri said while looking at the camera, “Happy Halloween,”

Fans got excited to see the video and it has already been viewed millions of times. There has been a lot of excitement for the upcoming project of Downey. After the end of Marvel, fans missed the actor on the screen. Hope the upcoming projects bring a lot of joy among the fans.

Selena Gomez Dating, What Was Her Love Life Like?