The New York Times paper covered the front page with 1000 COVID-19 death notices. Read ahead to know more. Also, find out the current status of coronavirus in the United States. Find out what Dr. Fauci has to say as well.

According to John Hopkins University, there are 1.66 million positive cases in the United States. 335,000 people have recovered. But the country is approaching the 100,000 deaths milestone.

New York Times filled the entire front page of Sunday’s paper with the death notices of victims from across the country. Furthermore, the list numbers nearly 1000 names, which is a fraction of the total loss of life in the country due to the virus.

The country’s death toll stands at 97,000. Moreover, it is the highest in the world. The United States will surpass the 100,000 marks very soon at the rate deaths are increasing to date. 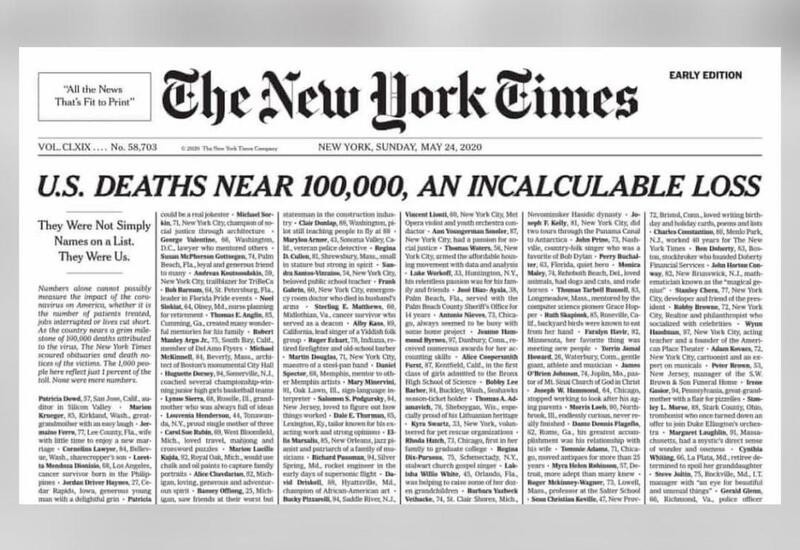 The United States has its Memorial Day this coming Monday. Many experts fear that the warmer weather and loosening of the lockdown might trigger a second wave of the deadly coronavirus.

The country is going through its worst time. President Trump has received a lot of criticism for his casual way of dealing with the virus in its initial stage. He is more focusses on playing the blame game with China.

What Dr. Fauci Has To Say

Dr. Fauci said he was hoping that the United States was ready. However, reports from Harvard University said that only nine states conducted close to the desired tests decided by the US Government.

He has been advising Trump on how to move with the current status. However, Trump is ignoring his advice and allowed lockdown to ease in the United States.