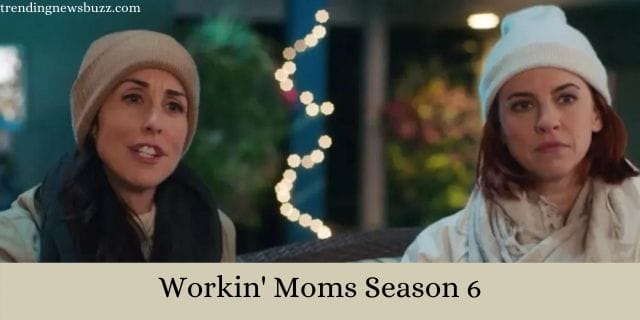 The series, which premiered on Netflix in the United Kingdom in 2017, depicts four closest friends attempting to balance their lives as mothers, wives, friends, and workers.

What is the new series about, who is in it, how many episodes does it have, and how can it be viewed?

Here is the pertinent information.

About What is Workin’ Moms?

Workin’ Moms is a Canadian sitcom about four ambitious and courageous working mothers who must manage caring for their children with other family obligations while working in high-pressure careers.

In contemporary Toronto, the women in their 30s face unique obstacles after having baby as they attempt to juggle their careers, families, and romantic relationships.

Who Are the Protagonists?

Kate Foster (Catherine Reitman) experiences the ups and downs of attempting to raise a child in the modern world while continuing to work a hard profession.

The ensemble comedy is largely based on the personal experiences of the lead actress and co-writer, Catherine Reitman.

Catherine Reitman (It’s Always Sunny in Philadelphia and How I Met Your Mother) is accompanied by her real-life husband, Philip Sternberg (Divorce Corp and The Super), who portrays Nathan Foster, her character’s spouse.

Dani Kind (Wynonna Earp and Coroner), Jessalyn Wanlim (Orphan Black and Scoundrels), and Juno Rinaldi will also reprise their roles (Such a Small Thing and My Special Guest).

When Is the Sixth Season of Workin’ Moms Available for Viewing?

The sixth season of Workin’ Moms will be available on Netflix beginning on Tuesday, 10 May.

Seasons one through five are currently available on Netflix.

How Many Episodes Are There in Season Six of Workin’ Moms?

There are thirteen episodes in the sixth season of Workin’ Mums. They are all 23 minutes in length and currently available on Netflix.

What Occurs in the Sixth Season of Workin’ Moms?

Working Moms’ sixth season bears the motto “Work-life balance?! What is it? Kate, Anne, Jenny, Sloane, and Val are working overtime to resolve major issues at work and at home.

Kate and Nathan received an unexpected visitor at the end of the fifth season who claimed to be Nathan’s long-lost son from a prior relationship.

Jenny discovered that she was truly pregnant after faking her pregnancy, while Anne learnt that her husband Lionel had been arrested for hitting his daughter’s boyfriend for the second time.

The sixth season will pick up where the fifth season left off, and as in the previous five seasons, each of the mothers will face new obstacles as they attempt to navigate the complexity of life.

ALSO CHECK: Vincenzo Season 2 : Everything You Need To Know About This Series!

In an interview with E! News, Catherine Reitman, the show’s star and creator, described the current season as “amazing.”

She stated, “I’m really incredibly proud of it. Once we begin filming, I’m able to energetically predict how the scenes will be edited together and how the narratives will interact with one another. It’s a fantastic season.”

There is a trailer for season six of Workin’ Moms.