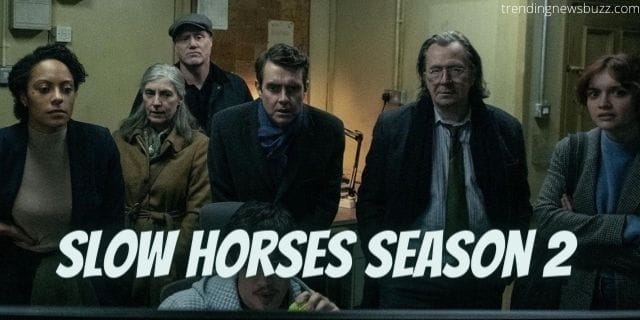 When Slow Horses Season 2 Will Be Coming in 2022? Updates!

Slow Horses is a British television series based on Mick Herron’s 2010 espionage thriller of the same name. The first two episodes of the series premiered on Apple TV+ on April 1, 2022.

Slow Horses season one has completed, following a dramatic and breathtaking conclusion.

While Hassan has been released, the kidnappers have been dead or imprisoned, and Lamb and his team have cleared their reputations, a number of loose ends remain, not the least of which is the horrific flashback detailing how Lamb wound there at Slough House and why he holds such animosity for River.

Naturally, fans are yearning for more from the Apple TV+ spy series, and those who stuck around to the conclusion may have gotten a sign as to where things may go next.

Continue reading to learn everything there is to know about the second season of Slow Horses.

Now that it has been revealed that the actors and crew recorded two seasons concurrently, all bets are off; Apple TV+ may release the second season whenever it pleases. There is no reason to delay for an entire year.

If, on the other hand, the first season’s audience reception is positive, Apple TV+ is likely to want to immediately begin production on a third season.

If this occurs, the second season will almost probably be released in the same year as the first. We are now predicting late 2022.

The return of the majority of the Slow Horses cast has already been confirmed.

At the close of the first season, Jackson Lamb and the rest of ‘Slough House’ played a critical role in rescuing Hassan, a Pakistani teenager captured by the right-wing organisation Sons of Albion.

This has enormous consequences for a number of the characters, which will almost probably be addressed in the show’s upcoming second season. With everything out of the way, let’s take a look at what fans may expect.

With Jackson as the boss, power clashes between him and Diana of MI5 are almost guaranteed. After all, the latter sought to frame him for the blunders made during her undercover operation, which nearly resulted in Hassan’s death.

Will they both honour their agreement to keep out of one other’s business in exchange for Diana’s incriminating photographs and Charles Partner’s file?

Equally, now that the audience is aware that Jackson murdered Charles, will Jackson’s refusal to inform Catherine of the truth come back to haunt him? She was sceptical of Jackson’s account of events, which could be reopened at any time.

How is River going to cope with being confined at Slough House, from one guy to the next? He was scheduled to return to work at the Park following his assistance in Hassan’s rescue.

When it became clear that this was not the case, could another justification for his continuous imprisonment at Slough House have existed? Apart from his professional challenges, a continuing mystery surrounds Sid’s whereabouts.

It was clear during the first season that the two share chemistry, even if one is defined by Sid’s ridicule of River’s ineptness.

While they made no public declarations of affection for one another, River voiced tremendous grief when he first feared she was dead.

However, now that it has been established that she may have begun her life, will River, as indicated in the season 1 finale, attempt to track her down with the assistance of Roddy?

Louisa and Min Harper have their first kiss in the first season, in keeping with the pair concept. Their mutual hatred for Struan grew organically into a friendship, which grew into a partnership. Will the couple persevere, or will Slough House be enticed into other ventures at their expense?

Finally, what is the state of Robert Hobden? In the season one finale, M15’s chief of security, Nick Duffy, placed him in front of an oncoming automobile to quiet him.

Hobden, after all, was aware of Diana’s role in Hassan’s abduction, which he desired to publicise. Will Hobden return after the audience has been kept guessing about his survival or demise? And, if he does, would he expose MI5 and take on politician Paul Judd in the process?

Where can I see Slow Horses?

Slow Horses is an Apple Original, available exclusively through Apple TV+. New consumers can sign up for a seven-day free trial of Apple TV+.