Donald Trump is sadly still not as popular as he thinks he is.

There are less than 5 months left for the elections and the results look pretty vivid.

Sadly enough, the US president is confronting an entirely different political reality than he once envisioned.

If the election were held today, Trump would likely lose. I’m more than sure.

The US deals with tremendous unrest over the death of George Floyd and the coronavirus pandemic.

On Wednesday, the pollster Gallup showed Trump sliding to 39 per cent in a poll taken between 28 May and 4 June.

For the first time is this man lagging below 40.

What a recession, from an all-time high of 49 per cent the previous months.

As per the pollster, Trump’s job approval rating has fallen significantly among all groups.

A seven-point drop among Republicans and Independents and a nine-point fall among Democrats.

Despite Trump’s boasts about being the most popular president among Republicans in history, he had gotten the least rating since September 2018.

Only 38 per cent approve of the way Trump is handling the presidency and 57 per cent disapprove.

This polling came just days after former defence secretary James Mattis condemned Trump as a “threat to the US Constitution”.

This was after peaceful protesters outside the White House were gassed just so the president could engage in a photo-op. 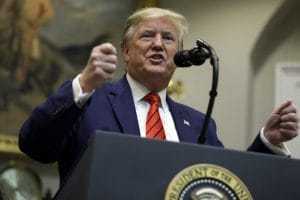 A new NBC poll shows that that eight out of 10 voters worried about the economy and the coronavirus.

Also, of course, about Trump’s seeming inability to repair tensions amid the Floyd protests.

Also Read: Reddit Starting Actions Against the Racist And Hate Speeches In The Platform

Top 5 Miniseries You Should Definitely See While Staying At Home