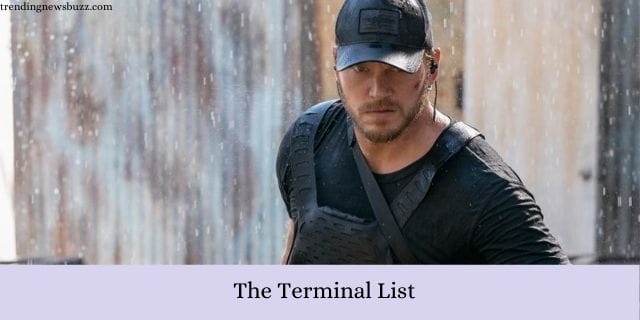 “The Terminal List,” starring Chris Pratt, is one of the most fascinating new Amazon Studios projects debuting this year. With Pratt in the lead role as Navy SEAL James Reece, “The Terminal List,” based on the 2018 novel by real-life Navy SEAL Jack Carr, has the potential to be a huge franchise launcher for Amazon, especially considering the novel’s authorship.

Pratt remains one of the top stars at multiplexes, with the “Guardians of the Galaxy” and “Jurassic World” franchises still doing strong, but the actor has recently shifted his focus to producing and choosing more personal projects. The first of these was the 2021 film “The Tomorrow War,” a time-traveling war thriller with a subdued paternal drama. This Amazon Studios film was produced by Pratt, and a sequel is already in the works (per Deadline).

Amazon has published a first look at “The Terminal List,” which appears to be the classic action vehicle that audiences have come to anticipate from the actor who was once best known for receiving a keyboard smack across the face from James McAvoy in “Wanted.” Here is all the information you need about “The Terminal List.”

Amazon’s first teaser for “The Terminal List” has a premiere date of July 1st, so fans won’t have to wait much longer to see the series. It is an appropriate time to end the series, given it is right before the Fourth of July. The similarly military-themed “The Tomorrow War” was also launched on July 2 of last year, and it was a hit on Amazon’s streaming service. They are now obviously expecting to pull a second rabbit out of the hat, which is possible. It’s still too early to tell if “Terminal List” will resonate with audiences as well as “Tomorrow War” did, despite the fact that there are eight episodes available.

Those interested in “Terminal List” can, if they so want, peruse an abundance of relevant material. James Reece, played by Chris Pratt, was initially presented in the 2018 novel “The Terminal List” by Jack Carr, a former Navy SEAL who has made a sensation in the literary world. The fifth instalment of his “Terminal List” series, “In the Blood,” will be released on May 17, almost a month before Amazon’s Reece makes his debut. Pratt himself has lauded the novel, putting a blurb on Jack Carr’s official website for the forthcoming release.

Chris Pratt as James Reece is unquestionably “The Terminal List’s” biggest star, although he’s surrounded by many recognisable people. Taylor Kitsch, Constance Wu, Jeanne Tripplehorn, Pratt’s brother-in-law Patrick Schwarzenegger, and Riley Keough as Lauren Reece are among the cast members. Jai Courtney, star of “A Good Day to Die Hard,” will also portray a character named Steve Horn (via IMDb). Amazon has not yet provided a comprehensive look at the characters, but Jack Carr’s novels feature a large number of military and non-military characters that could have intriguing arcs throughout the series.

The series also features notable names behind the scenes. “Training Day” filmmaker Antoine Fuqua is an executive producer on the project with Pratt. The director is no stranger to adapting literary thrillers to the big screen; he helmed 2007’s “Shooter,” which was based on Stephen Hunter’s Bob Lee Swagger novel series, and later produced a three-season USA Network television adaption about the same character (per Variety).

Amazon Studios has released a short teaser video for “The Terminal List,” revealing the film’s release date of July 1 and providing the first glimpse at Chris Pratt as James Reece in action. The brief teaser depicts Pratt crashing automobiles, firing firearms, and clutching an axe in a frightening manner, all of which we have come to anticipate from Chris Pratt photographs.

Reece examines an attack of his Navy SEAL team on a secret mission in “The Terminal List.” In the novel “The Terminal List” by Jack Carr, Reece must rely on his wits and tenacity to uncover the truth after falling prey to government conspiracies.

It is an action-packed book, but what makes it stand out is that Carr gave a sense of authenticity to a soldier grappling with the death of comrades and coming to terms with the possibility of betrayal by members of his own government. Carr is a former Navy SEAL, and he already has a fifth “Terminal List” book forthcoming, so he has a fan base, and the programme will have plenty of material to draw on (per Simon and Schuster).

Chuck Norris is one of Carr’s followers; he supplied a blurb for the original “Terminal List” novel, describing it as “extremely intense.” Perhaps a star cameo is in the plans for the future.