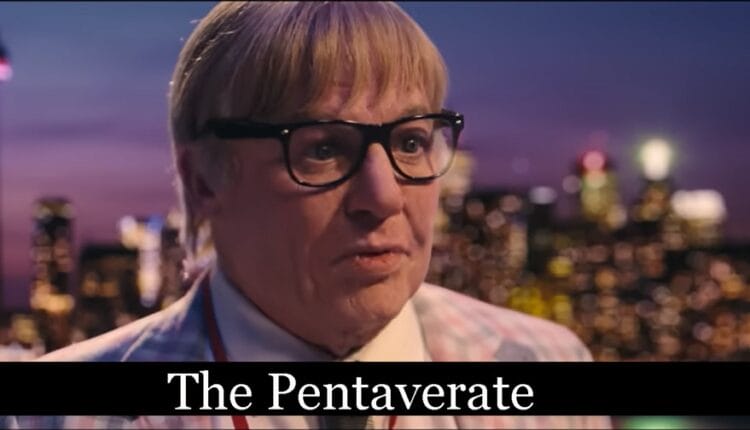 Mike Myers is one of the greatest actors of all time and probably the underrated one. After releasing “So I Married an Axe Murderer”, many people came to know about him but at the same time, the movie was considered one of the most underrated films of his career. Well! Things have been going pretty well and the actor is coming back with his all-new series on Netflix. Mike Myers’s ‘The Pentaverate’ is officially coming on Netflix and the fans are excited to witness the series for the first time.

When it comes to web series, I can put my blind trust in Netflix. The upcoming pentaverate is something that everyone is hoping to see. The officials have already released some teasers about the show and it looks tremendous.

On the other hand, the fans of Mike Myers are excited to see him on the screen again. It’s been such a long time for the actor to come and interact in the shows. Produced by Jax media, the series follows a  Canadian journalist who tries to shed some life on the social problems of the society. He tries to solve the conflicts and tries to find out about the five men who tried to control the world in 1347.

Are you interested to read about the series? If yes then this article is for you. Here is everything that you need to know about the upcoming movie.

The Pentaverate Release Date: When is it going to Release? The good news is that the officials have already revealed the official trailer of the series. With the first looks getting exposed to the audience, the fans are already acknowledging the series for its powerful dialogue and amazing character choice.

Are you waiting for the release date? So the date is already scheduled. The Pentaverate is exclusively going to release on 5 May 2022. Anyone who wishes to watch the series can exclusively premiere the show on Netflix.

The Pentaverate Cast: Who is in it?

Created by Myers, who is also working as the main protagonist of the show, the series will feature him in seven different roles. Along with him, the show has the executive creator and the directors that brings the show to where it is which includes, Tim Kirkby. John Lyons, Tony Hernandez, Lilly Burns for Jax Media, and Jason Weinberg in it.

Talking about the cast, Netflix has already confirmed the cast and gestures of the character that will be going to be in it.

Talking bout the main lead, Mike Myers who will be going to feature as seven different characters. His highlighted role will be Ken Scarborough, A Canadian news journalist who decides to find the truth about the Pentaverate and shows the world his honesty. Along with this, he will be seen as

Along with these characters, the show also features a bunch of other actors that will be working in the series. Ken Jeong as Skip Cho, Keegan-Michael Key as Dr. Hobart Clark, Debi Mazar as Patty Davis, Richard McCabe, Jennifer Saunders, Lydia West as Reilly Clayton, Rob Lowe, and Maria Menounos. Starring the comedian Mike Myers as the lead role, Netflix’s upcoming series The Pentaverate will unfold the reality of what exactly happens in 1347. Produced by Netflix, the series is going to be amazing and will reveal some of the dark secrets about the past.

Myke is going to play the role of seven different characters over the series and the first season is going to release six episodes. Fans are already rejoicing over the fact that their favorite celebrity is going to be cast under the exclusive series on Netflix. Along with him, we are going to have  Ken Jeong, Keegan-Michael Key, Debi Mazar, Richard McCabe, and Lydia West co-star in the series, as well as Jennifer Saunders in the show.

What makes the series amazing? A show gets power through its storyline and amazing character development over the season. A series should maintain the interest of its characters to the end and at the same time feature an amazing storyline so that they can relate.

The officials have already released the official trailer which is popular among the people. The reveal of the trailer brings the light what the series is going to be. What do you think about the Illuminati? It seems a cool phrase earlier but now many people might get bored with the concept.  But the new Netflix series will bring back the amazingness of the word to your life.

With the unfolding of the trailer, we came to see what happens in the series. The official trailer shows Rob Lowe standing in front of Illuminati symbols and saying, “Congratulations! You’ve just been kidnapped into the world’s oldest and most effective secret society of five men.”

The official line of the show asks, “What if a secret society of five men has been working to influence world events for the greater good since the Black Plague of 1347? As this new series begins, one unlikely Canadian journalist finds himself embroiled in a mission to uncover the truth and just possibly save the world himself. Remember, the Pentaverate must never be exposed!”

Myers will be playing the role of seven different characters with his major role Ken Scarborough in the limelight, The catcher will unfold the secret society of the time and will tell what exactly happens during the era. The person who gets interested to listen about the history and what happens, this is something that he should try for sure.

Where is the Official Trailer for the Show?

If you have missed the official trailer of the series then don’t worry. Anyone who wished to watch the series, here is the official trailer for you. The official trailer reads, “An unlikely Canadian journalist finds himself embroiled in a mission to uncover the truth about the world’s oldest and most influential secret society. From the mind of Mike Myers and starring Ken Jeong, Keegan-Michael Key, Debi Mazar, Richard McCabe, Jennifer Saunders, and Lydia West – The Pentaverate premieres globally 05.05.22 only on Netflix.”

The Pentaverate is officially released on Netflix. The series, developed by Mike Myers gets a lot of highlights from the audience. The actor is going to develop and acts in the main lead role. Along with this, he will be featuring seven different roles that would be exciting to watch. What do you think?

Comment down your reaction to the movie and let everyone know about it. Follow Trendingnewsbuzz and find out everything.