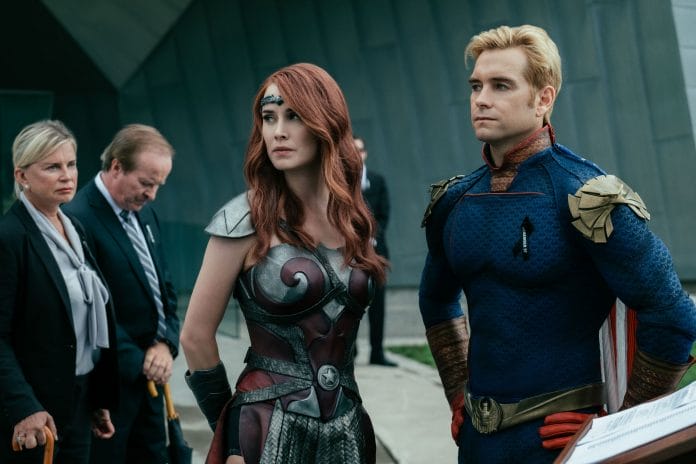 The Boys is coming back for another season on Amazon Prime. The superhero adventure show takes life from comic books of the same title. The Amazon Prime original will come back for season 2 shortly, and the release date is out! Here is everything you need to know about The Boys Season 2.

The Boys season 1 leaves us in a shock. It shows that Billy’s wife is alive and well and raising Homelander’s baby. The show takes a different turn from the comic books with this revelation. Therefore, we can expect to see significant changes with Homelander taking up the father’s role for his kid.

Sitwell is also dead, and that means that The Seven have more power now. The show may drift away from the comics more in portraying future characters. The character of Tek-Knight will be an interesting one to tackle in season 2. The actor will play a prominent role, but it is the portrayal that we are curious about.

Tek-Knight has a bit of a… sexual problem. Yep. He humps anything and everything and we are genuinely curious to see how his character will act on the show. Another character that may make an appearance is The Legend. A prevalent character in the comics, He may play an essential role in helping the Butcher, perhaps to gain more power against his rival.

Karl Urban, Jack Quaid, Tomer Kapon, Laz Alonso and Karen Fukuhara are coming back as leads on the show. Simon Pegg is unfortunately not coming back in Season 2. New cast members that are joining the cast include Aya Cash. Cash will play Stormfront, a significant character and antagonist in the comics.

Giancarlo Esposito also makes a cameo appearance in season 1. However, he may have a more prominent role to play in season 2.

Recently an Instagram post confirmed the released date of the second season. The post confirms that the new season is done with the shooting. It also mentions that it will come out in Mid-2020. So we can expect the show to come out soon.