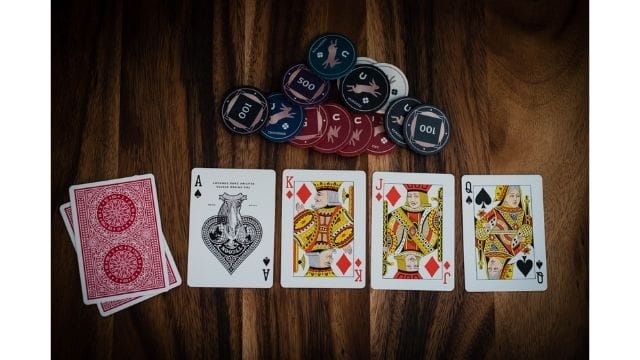 The Best Poker Scenes From Your Favourite TV Shows

The game of poker has been played for around 200 years, originally created by French settlers in New Orleans. It started with a deck of 20, and four players betting on the most valuable hand.

Now the game is usually played with a deck of 52 cards, and it is beloved the world over. From people playing in their bedrooms to huge stars like Ben Affleck playing at the World Series of Poker.

Since it has gone online, it has enjoyed even more popularity, as now poker lovers can play anywhere. There is no need to organise a game or venue, or worry about laws, as there are games happening online.

It’s no surprise that poker has made its way onto our screens in different formats too. Anything that captures the zeitgeist the way poker has over the past few decades becomes integrated into popular culture.

Many people are familiar with big movies featuring poker games, such as the Bond movies. However, poker has shown up in some great TV series too.

Here, fans of the card game can discover some of the best poker scenes from popular TV shows. These scenes capture the drama and anticipation of the game, and create funny scenarios for the characters.

In season 2, the third episode of the much-loved British sitcom shows Del Boy playing a high stakes poker game. His opponent is his drinking buddy, Boycie, an affable car salesman.

It seems like lady luck is on Boycie’s side throughout, but Del Boy has his number. The anticipation builds in the scene, much like the comedy value.

The supporting characters Rodney, Grandad and Trigger all add to the fun set in the flat at Nelson Mandela House.

Broadcast in November 1982, this was one of the earliest appearances of poker in a TV show. The comedy show had many fine moments over its lengthy run, but poker players will love this.

2.The Sopranos – ‘The Happy Wanderer’

Across the water in New Jersey, USA, The Sopranos series was a good fit for a poker game. In episode 6 of the second season, Tony’s second-in-command Silvio, doesn’t handle losing well.

Silvio is pretty aggressive to everyone in the room during the scene, but Tony gets a kick out of it. The tension is palpable as everyone at the table wants to laugh but can’t.

3.Friends – The One with All the Poker

In the first season of Friends, everyone had already fallen in love with the six characters by the 18th episode. At first, they play poker for fun, but we see who has a competitive streak!

The girls are tired of losing and want to buck the stereotype, so they ask Monica’s aunt Iris for help. Iris is an old pro at the game, so she teaches them some tricks.

The comedy value is strong here, as the actors have impeccable timing. Some of the jokes may not have aged well for some viewers, but you can’t deny the great lines.

There’s also some heartfelt moments too, particularly Ross’ reaction to Rachel missing out on the Sak’s job.

4.The West Wing – Evidence of Things Not Seen

From Friends to the White House, Matthew Perry featured in an episode of the West Wing where poker is played. However he doesn’t get a seat at the table, he’s been interviewed for an Associate Counsel role.

Meanwhile, the audience sees the President indulge in a light hearted game of poker, unlike his high stakes daily decisions. Apparently this is Friday night poker at the White House, a regular occurrence.

The game isn’t really the focus here, it’s more about the conversation at the table. As always the writing is tight and the delivery is top-notch.

Who wins? The President, of course, but it’s worth watching for his trivia tidbits.

5.Star Trek: The Next Generation – All Good Things…

Poker is a game that we see the crew aboard the Enterprise play quite regularly. Their choice of game is five-card stud, though others pop up from time to time.

Will Riker is the host of the games usually, and he is a brilliant poker player.

In this episode, which ended the seventh season, Captain Jean Luc Picard joins the crew for a game. Poker is a game where everyone is competing, but apparently in outer space it doesn’t cause division.

The Captain is invited to shuffle, and he is given a friendly welcome to the game. A sense of camaraderie unfolds throughout the game, so it really is a friendly game of poker.

These are just five of the most memorable TV poker scenes, though other series have used it to good effect. Check out:

If you’re keen to see poker played on the small screen.

The reason that poker works so well in any genre is that it has innate drama. Depending on the character, this can be used to amp up the comedy or tension.

Seeing how the characters react in a game is also very entertaining. Thus writers will use poker as a device again and again.