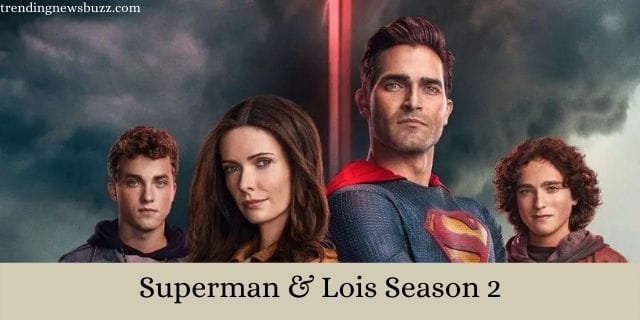 Greg Berlanti and Todd Helbing adapted the DC Comics characters for the small screen. In the shared universe of ‘Arrowverse,’ it is a spinoff of ‘Supergirl’.

The first season of the show earned outstanding reviews from critics due to its innovative and exciting take on Superman. Following a difficult first season filled with shocking events, fans are eager to learn more about the second season. Here’s all you need to know about ‘Superman & Lois’ season two!

The second season of Superman & Lois will premiere on The CW on January 11, 2022 in the United States. We are still awaiting confirmation of a UK release date, but you can be confident that we’ll let you know as soon as we do.

There is a significant likelihood that it will be a while before the second season is broadcast on BBC iPlayer and weekly on BBC One in the United Kingdom.

Clark, Lois, and their sons struggle in the first season of ‘Superman & Lois’ to adjust to life in Smallville. Clark’s Kryptonian half-brother Morgan Edge is revealed to be Tal-Rho.

Clark and Irons thwart Rho’s evil plans as Superman. Tal-Rho gives up his will to the Eradicator in order to save Krypton at whatever cost.

After confronting Tal-Rho, the Kents may make a fresh start in season 2. Irons’ attitude of Superman may change in the future, and he may become more eager to collaborate with the hero.

Jordan and Jonathan, like their father, will have to adjust to balancing two careers and two families. If Rho’s Zeta-consciousness enters Jordan’s body, he may experience mental changes. Clark and Lois may uncover another another conspiracy, exposing them to even greater perils.

It is possible that Bizarro, Doomsday, and General Zod will all appear in the second season of Superman.

In this regard, it is hoped that the next film in the series will have thrilling action sequences, tragic drama, and intriguing adventures for the DC Comics universe’s heroes.

In the upcoming second season, both Wole Parks and Adam Rayner will reprise their roles as The Stranger/John Henry Irons and Morgan Edge/Tal-Rho/Eradicator, respectively.

Check out the Season 2 trailer for Superman & Lois below.