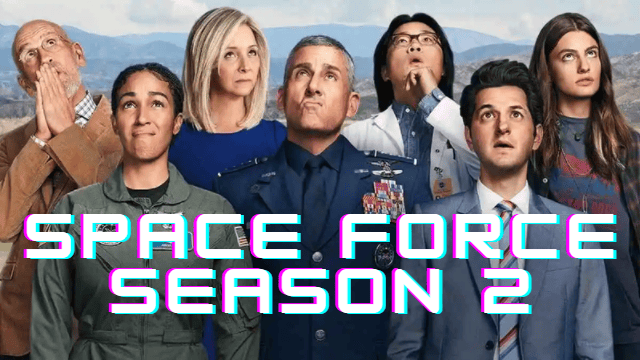 After an almost two-year delay since the first season aired in May of 2020. The new season of Space Force is due to launch on Netflix this week. Space Force Season 2 will only include seven episodes, all of which will be accessible on Netflix. It releases new TV series and movies in the United States at 00:00 PT. 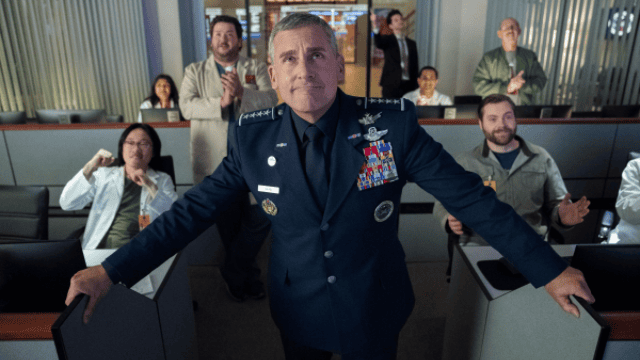 The Hollywood Reporter first reported in November that the streaming platform had renewed the Steve Carell-led comedy. After relocating production from Los Angeles to Vancouver in an effort to cut costs.

On February 18, 2022, Steve Carrell’s workplace comedy satire Space Force will return to Netflix for a second season. The series, which Greg Daniels of The US Office created, mocks Donald Trump’s proposed US military branch, the space force.

Everything you need to know about the return of Space Force on Netflix. Nearly two years after Netflix’s Space Force blasted onto the streaming platform with its comedic sci-fi spoof, the hit series returns this week for its sophomore season. For avid fans hoping for another flight of episodes to capitalize. Further on the show’s definite potential, their geeky hopes have been answered.

Space Force first debuted back in May 2020, and Season 1 follows the shaky career of General Mark R. Naird (Steve Carell), a four-star leader who is unexpectedly assigned the command for a new division of America’s military. It dedicated to bolstering the nation’s dominance in space and getting astronauts back to the Moon.

Naird accepts the task and moves his family to Colorado to oversee the new military branch. He joins a shady group of scientists and astronauts to create the program against a slew of problems and roadblocks. Let’s take a look at all we know about the return of the Space Force. And light the candle for Space Force Season 2 !

What Is the Series, Space Force Season 2 All About?

Space Force is a workplace comedy about the US military’s newest branch: the space force. It’s presumably a parody of Donald Trump, who built the department and has since been extensively derided for it. 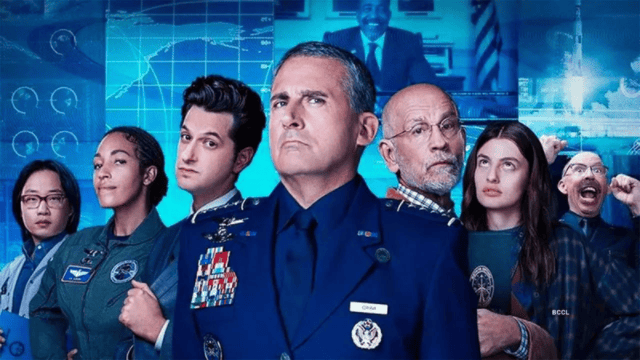 Space Force Season 2  will begin where Series 1 left off, with other military forces attempting to depose Steve Carrell General Mark L Naird and replace him with someone more aggressive and expansionist.

Space Force Season 2 Has a Release Date and Time.

On Friday, February 18 February, at 03:00 ET and 00:00 PT, the second season of Space Force will be published on Netflix. Following the format of the first season’s episodes, each episode will run for half an hour. On January 18 January, Netflix tweeted on their official Twitter account, “Not even gravity can hold them down.” “On February 18 February, Space Force returns.”

“Our aim is that when people watch it, they will feel the joy and the looseness in us getting to know our characters better and playing,” Schwartz stated ahead of the second season’s launch. “It’s been a lot of fun.” We were also all in Vancouver simultaneously, so we got to know each other a bit better. This time there was more room to play.”

When Will Space Force Season 2 Be Released?

At midnight Pacific, which is 3 a.m. Eastern, Netflix releases new movies and TV episodes. As a result, Space Force Season 2 should be available on the streaming platform.

This Series Has How Many Episodes?

The second season of Space Force will consist of seven episodes, each lasting 30 minutes.

What Is the Plot of Season 2?

General Naird’s young organization is coming under scrutiny, and the strain is building. With a new political government in power, Naird and his charming but misbehaving workforce are given a five-month deadline to inspire complete trust in moving forward. Otherwise, the President will quickly yank the financing plug. Is Space Force capable of proving the doubters wrong? Or will it be demolished and gutted because of its ineptness? Space Force Season 2 should provide answers to these and other questions. 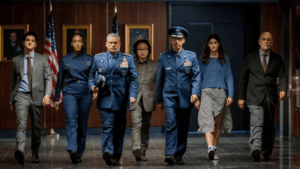 When and How Will I Be Able to See It?

On Friday, February 18 February, Space Force Season 2 will be available to view on Netflix. There will be seven half-hour episodes in the series (three fewer than season 1).

Why Should I Bother to Watch It?

Carrell and Daniels have disclosed that this season’s production was less constrained, giving the ensemble more opportunities to improvise – something they’re all supposed to be rather excellent at.

Review of the Film

In this critic’s opinion, the main issue left hanging after Space Force’s first season had nothing to do with space battles or prison breakouts – it was whether the series would improve by the time it returned. The comedy starring Greg Daniels and Steve Carell had a shaky start, but it concluded better than it had begun. There was every reason to hope, if not necessarily anticipate, a more robust season two of Space Force.

The good news is that Space Force appears to have made a much-needed course correction. Further resulting in a more consistent and logical series. Extraneous satire and off-base subplots have been dropped. In favor of a stronger emphasis on the primary group of people. Allowing Space Force to unveil itself as the more streamlined and accurate workplace comedy it always had the potential to be. The bad news is that it is still ineffective. Season one was just promising enough to warrant a second look, while season two is just dismal sufficient to indicate we don’t need one.

In an ironic twist, the majority of season two is devoted to the military branch’s attempts to defend its existence. They fight negative press, budget cuts, and suspicious decision-makers under. The leadership of the awkward but righteous General Mark Naird (Carell). As a result, both the Space Force and the Space Force have become thinner. Season one’s grandiose objectives, such as space chimps and lunar homes, are no longer available. As are the toothless parodies of real-life individuals like Elizabeth Holmes and Alexandria Ocasio-Cortez. The strange subplot with Naird’s wife (Lisa Kudrow) has been reduced to nearly nothing, and it isn’t missed. Even the number of episodes has been reduced from 10 in season one to seven.

Despite all of this fine-tuning, the series as a whole remains extraordinary, mainly in its lack of awe. The planning is still sloppy and bumpy. Individual episodes appear to shift gears multiple times before fizzling out. But serialized arcs spin their wheels before vanishing. After returning from the Moon, Angela’s mental health issues should have made for compelling writing. But they are underplayed to the point of being worthless. Meanwhile, Erin’s foray into the stock market is well-publicized. But little has happened by the conclusion of the season. I think Space Force could have used a little more time to flesh out. Some of these stories, but given how little time it does have, it feels rushed.

The Humorous Part of the Story

Instead, season two focuses on the regulars’ adventures and friendships. With more humor set in and around the base. This time, the tone is more The Office than Veep. Episode after episode underlines how much these team members care about one another. Particularly how much they adore and respect Naird, who has been re-calibrated to appear more grounded. He’s still bumbling enough to display a painful and personal medical procedure onto screens across the office. But he’s less prone to hissy fits and musical outbursts. He’s dropped the strangely gruff voice, according to PR expert Tony (Ben Schwarz), who agrees with audience complaints of its “artificial tone.”

In principle, the program is doing everything correctly. Season two expands on the love tension between scientist Chan (Jimmy O. Yang). And astronaut Angela (Tawny Newsome), which was clearly the most significant part of season one. It even gives Tony a rare opportunity to show off a softer, gentler side. Erin (Diana Silvers), Naird’s daughter, is awarded an internship at Space Force. It allows her to get more immersed in the goings-on on base. The once-hostile relationship between Naird and top scientist Mallory (John Malkovich). It has evolved into an odd-couple dynamic that can be rather adorable. Like in one episode when each man prepares to gently give terrible news to the other.

End of the Movie

If Space Force was hilariously humorous, these dramatic flaws might be more tolerable. As one could expect from such a talented ensemble, it has its moments. “Blackened Cajun fish with cranberry vinaigrette” is an entire dinner in Malkovich’s mouth. Don Lake, who plays Brigadier General Gregory (basically Naird’s administrative assistant). It provides a steady stream of laughs, tossing out lines like. My wife was taken by aliens on a business trip and forced to have sex with her employer with disturbing glee. Few actors are better at playing somewhat questionable but ultimately endearing motormouths than Schwartz. Like so much else in Space Force, the jokes feel like they should be better than they are.

By the end of season two, Space Force appears to be on the verge of disbanding. With its core squad debating whether to seek new opportunities and experiences away. From one another or stay together and fight to retain what they once had. Who could cheer against a fictitious gang of tight-knit weirdos? Obviously, we’re supposed to hope for the latter. But, in terms of Space Force, the greatest thing the program can do now may call it a day. Allowing its characters to go on more thrilling new adventures.

Yes, you can bet your orbital thrusters on that! On January 27 January. Netflix published the final official trailer for Space Force Season 2. Take a seat and enjoy the endearingly stupid teaser below. Netflix has not announced plans for a third season. And the earliest it may air is this autumn, based on the time frame observed when Space Force Season 2 was authorized.

Hitorijime My Hero Season 2 : Things You Need to Know!