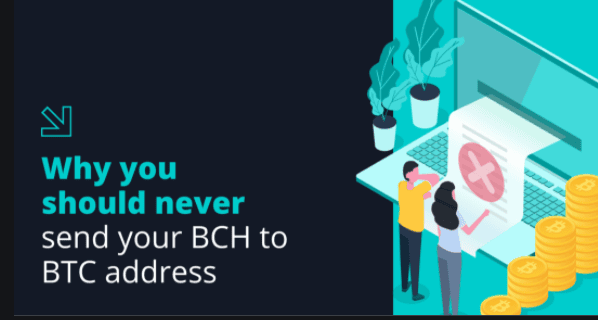 Bitcoin and Bitcoin cash works on two different blockchains. But due to their similar format and addresses, they can sometimes be mistaken for each other. So many times, individuals send Bitcoin cash to Bitcoin wallets. It can be disastrous as that money can be gone for good.

The Blockchain Cash Network was created to increase the efficiency of conducting transactions of Bitcoins. With the BCH network, individuals can conduct more transactions per second. It is almost impossible to change the basic coding of Bitcoin, and so the developers of the cache network ultimately left Bitcoin to create a new network for transactions. It is built on the same 8 MB block size limit but without the Segwit transactions and addresses support. So, Bitcoin Cash created an entirely new network with better Blockchain technology and modified rules. For comparison, during the split, BTC only had a blockchain size limit of 1 MB.

But the problem arises when BTC and BCH shared a similar address format, and many users started mixing them up. So, when the users transferred the BTC currency to the BCH wallets, the money got stuck in the Blockchain with no way to recover it. To easily exchange coins, try bch to btc exchange.

How to avoid errors when transferring money to wallets?

There is no other way of transferring money to the right wallet other than double-checking and rechecking where it is being sent to. After realizing the problem, the BCH developers proposed a new address format. It is now easily distinguishable from the old BTC network. It usually starts with a small letter ‘P’ or ‘Q’ or bitcoin cash. It is called CashAddr. The introduction of new address formats has reduced reported cases of such blunders, but even still then, it still does happen.

Can someone ever get back stuck coins?

It is not impossible to recover The lost money, but it is challenging. From 2018 to 19, many Bitcoin miners could mine a lot of the stuck coins back. The Bitcoin miners have access to a non-standard Bitcoin cash transaction script that can be used to do so. The miners returned around 18000 coins to their original owners. But rumor goes around that a minor managed to find around 9000 BCH and did not return it.

Until something concrete can be paid down, BCH developers try to do everything not to allow access to BCH coins stuck in the network.

How to avoid such a mistake?

The one who is exchanging or sending currency to another wallet is in ultimate control of the money. They should double-check the entire information and the currency to which it is being exchanged, and the wallet it is being transferred to. If the sender makes a small mistake, it can cost a lot. The money can then be returned only by undertaking a mammoth task. But the BTC coins which are once lost in the BCH network are gone forever. The mistake is the sole responsibility of the sender and not the exchange medium. The mediator can help in no way to recover the funds or restore them from the network. Keep track of the prices of cryptocurrencies and exchange them easily on lets exchange.io.