Are you a Book lover? If yes, then there is no doubt that you haven’t heard of Jane Austen. Her role in the field of novels have a different meaning now. From Sense and sensibility to Pride and the prejudice, these are some of the masterpiece created by her. She is one of the oldest writer and when I say oldest, I mean 1800s, Can You Believe? The popularity of her work can be understood by the number of movies and show which are based on it. All her work have been converted into the movie and one of them is Sanditon and I am sure that you have heard this show before.

In this article, We’ll be discussing about it’s upcoming season 2 and whether it is coming or not? Not only this but we’ll also take a close look at the recent hashtag related to Sanditon. I don’t know whether you heard it or not but recently #Savesandition was trending in twitter. Don’t leave this page and read the article till the end to know everything about the Sanditon.

Sanditon is an unfinished novel by Jane Austen which she started to write on 1817 but later stop writing because of her health issues. Andrew Davies decided to take Jane Austen’s amazing work and turn her novel into a show.

During the time of writing this novel, she was suffering from a disease which later killed her. In the drama Sanditon, the first season have already published the 11 part which was written by Jane Austen in her times. Now, the responsibility to complete Season 2 of Sanditon is on the show makers.

As now, the writers bare going to write the next season i.e. Season 2, it will be great to see this famous show finally getting into a shape. Jane Austen’s fan also responded that this drama is “Un-like Austen’s” because the stories of her always up to a Happy ending but Sanditon was something different . 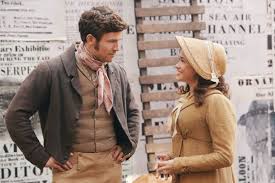 Sanditon released it’s first season on 25 August, 2019 and it’s been more than 1 year since we last heard about it. But the big question arises here is that, Is it’s second part happening? Read the next section to know about it.

Sanditon 2 – Is it Happening Or Not?

The ITV, which is the main network channel of Sanditon have decided to cancelled the show right after the show end. The fans were furious and released many hashtag and sign petition to release the Season 2 but can it bring back the season 2?

Moreover, Jan Austen novel are always ended up in a happy note but Sanditon was something which do not follow the same path. The writer fall ill shortly after completing eleven chapters and fans wanted to know more about the story but will they? We don’t know. Nothing is officially confirmed yet but fans do have some other plans to do.

We all know how fans can do anything in this world. From flying a airplane in the Netflix head quarters to signing the petition to donating money for the production are some things which will remain unforgettable for every people out there. Series like Glow and Lucifer are some of the examples.

So glad the #SaveSanditon Squad Gofundme donation was able to play a small part in this worthy cause! #Sanditon #SanditonPBS https://t.co/DTiW6tXoIS

However, I’ll be very wrong if I’ll say Sanditon fan’s have done something similar but they have at least done something which became noticeable to the people and also to the authorities. Twitter was exploded with the hashtag #Savesandition which was started by the fans of Sanditon demanding the season 2. Fans are reacting drastically for the season 2 are here are some of their tweets fir you.

“Currently watching the dance scene on repeat to emotionally recover from today. Ugh. Its so perfect. Why there us no Season 2? Literally this is the best drama ever ❤️”

“A perfect rose amongst all the dandelions, a breath of fresh air and as beautiful as ever. He took another sip to calm his nerves, hoping that no one had seen his reaction before moving away. She was here! Such a beautiful story to watch and read. I don’t know why they are not bringing season 2. It’ll become great shoe I am sure. Please renew it. 😭#Sanditonditon #SanditonPBS”

There are many rumors going around the internet that Season 2 is getting Renewed and Amazon Prime is taking over Sanditon second Installment. The Amazon Prime Official twitter account posted about Season 2 and you can read the rest of it by clicking on this link.

#SaveSanditon Squad, we hear you and we’re doing what we can. Please could you retweet this to let us know how many of you there are so we can make a case for a new season? P.S. Don’t use multiple accounts or we’ll get in trouble pic.twitter.com/FBfyfG87kb

But this was just a assumptions by tge fans. The most obvious reason why many of Sanditon fans thought of renewing Season 2 is because fans found something interesting. Wanna know? In January 2020, some fans found a government website which is used to take records if the building.

In the same website a new lease was listed for the same building which is used for the production of Sanditon’s Season 1. The document was listed as Sanditon 2. Now, this isn’t a normal thing for the fans and they didn’t take a second to believe that there will be Season 2 for sure.

Moreover, there is another news going around regarding the new company for Sanditon Season 2. Last month, January 2021, a new company was formed which named as Sanditon Season 2.With all these hints, thee show admirer now think that there will be Season 2 for sure. But still we’re waiting for the official announcement, what about you? Do tell us in Comment section.