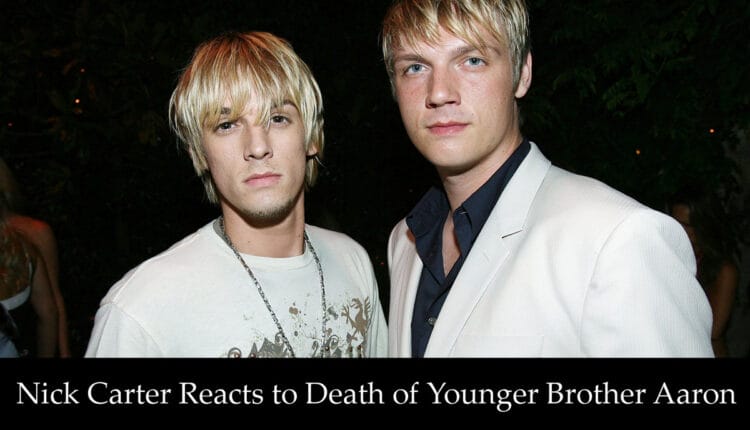 Nick Carter Reacts to Death of Younger Brother Aaron: ‘My Heart Has Been Broken’

Nick posted an emotional message which includes a picture of him and Aaron’s childhood and youth picture, the caption reads,  mourning the loss of his brother, Aaron Carter.

“My heart has been broken today,” the post began. “Even though my brother and I have had a complicated relationship, my love for him has never faded. I have always held onto the hope that he would somehow, someday, want to walk a healthy path and eventually find the help that he so desperately needed.”

The post continued, “Sometimes we want to blame someone or something for a loss. But the truth is that addiction and mental illness is the real villain here. I will miss my brother more than anyone will ever know. I love you Chizz. Now you get a chance to finally have some peace you could never find here on earth….God, please take care of my baby brother.”

Nick Carter added, “Sometimes we want to blame someone or something for a loss, but the truth is that addiction and mental illness are the real villains here. I will miss my brother more than anyone will ever know.”

On Saturday, it was reported that the former artist, Aaron Carter, was found dead. At the age of 34, the young artist was found dead, and was confirmed by the reports later on.

In 2019, Nock reported a case against Aaron where he charged him for saying that Aaron has allegedly tried to kill his wife and unborn child.

Before the death of Aaron, Nick and Aaron had a complicated relationship. Their story has always been a hot topic among their fans who kept dealing with controversy and allegations over each other.

Nick Wrote, “After careful consideration, my sister Angel and I regret that we were required to seek a restraining order against our brother Aaron today,” “We were left with no choice, but to take every measure possible to protect ourselves and our family.”

After that, Nick didn’t stop and revealed his thoughts by saying he still loves his brother and he would help things to get settled down. He hopes that things get better by saying “the proper treatment he needs before any harm comes to himself or anyone else.”

After the post, Aaron reacted and tweeted regarding the matter. When he came to learn about the restraining order that his brother has filed against him, he said, “So my brother just got a restraining order against me. And I was just served lol.”

“Take care. @NickCarter we’re done for life,” he continued. “I haven’t seen him in four years. And I don’t intend to … I am astounded at the accusations being made against me, and I do not wish harm to anyone, especially my family.”

Aaron was known by Nick’s younger brother. The Artist started his fame in 1997 when he debuted his first hits. The popularity of the artist was followed by Aaron’s Party (Come Get It) (2000), Oh Aaron (2001), and Another Earthquake! (2002).

Hilary Duff also reacted to the death of Aaron and shared a picture of him with her by writing I’m deeply sorry that life was so hard for you and that you had to struggle in front of the whole world. You had an effervescent charm… boy did my teenage self love you deeply… Rest easy ”

Paris Hilton also took over Twitter and said, “Known him for years and always really liked him, he was warm and really funny,” Hilton shared on Twitter. “Loved putting on a show and he was good at it. I’ll find some pics of us and post more later… damn RIP buddy.”

Trisha also shared a tweet and grief over the death. She said, I’m not sure what to say in situations like this but not saying anything at all doesn’t feel right. I just hope people will remember Aaron Carter for who he was in life – a kind soul with immense talent. My deepest condolences to his family.