The invincible Corona Virus has left us distressed at home ranging from very little to nothing to do.

At this peak time, Netflix drops by like a knight in shining armour in our mundane lives.

With every other person getting into a frenzy because of utter weariness, Netflix’s best shows are here to save lives!

Having said that, you definitely know where I’m leading.

Yes, Money Heist, or as they say it in Spanish, La Casa Da Papal, has already engrossed a million viewers!

This is not a database, collected after over a month of being telecasted. Nu-Uh! This record has been made within merely 3 days!

I know, folks. This couldn’t get any more crazy.

It has seemingly broken records of the past few hits, namely (my favourite) Brooklyn Nine-Nine and Game Of Thrones, among others!

Money Heist undoubtedly has a plot like no other I have seen in quite some time now.

It follows the story of a man posthumously named ‘The Professor’.

His subsequent aim is to loot banks and print billions of Euros in the Royal Mint of Spain. Quite adventurous, eh?

What’s interesting is how to bring this lethal plan to action, he enlists 8 sharp-as-a-knife thieves who have everything to gain and nothing to lose.

Everytime i refresh my feed,there’s another friend singing Manu Pilas’ Bella Ciao(the theme song)and nominating others to do the same. Trends,I tell you!

Fun fact: Money Heist is the first non-english tv series to have gained worldwide fame! Is it nice or is it nice?

When Money Heist was first released in 2017, in Spain, it was quick to attract Spanish viewers. 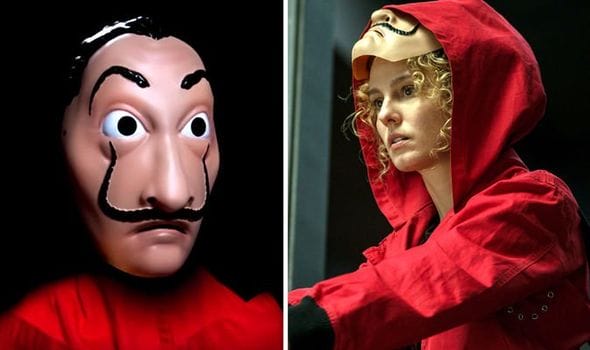 If you’ve seen the series, you’d know what I’m talking about.

The picturesque visuals, the plot, the character development, the flashback, everything seems to fit just about right.

It gives off a vibe which a lot of today’s shows do not. No wonder people are so hooked.

What Makes It Wonderful

See, at this time of home-wreck, Netflix is a getaway for most people out there.

Consequently, plenty of shows/documentaries/series/movies have seen an uprising because of, well, boredom and a constant need to find entertainment.

This is worthy of patting the creator’s back. Good job, Alex Pina!

What Did We Decipher From This (Money Heist)

Ranking number 1 in the series of ‘Most-binge-watched-shows’ from March second week till now, Money Heist is, no wonder, worth your precious time.

So sit back in the sofa, put a papaya mask on, grab a milkshake, some popcorn and tune in to watch what the world is watching!

I’m sure you don’t want to feel left behind, do you?

When Can We Expect Season 5?

Well Money Heist has been renewed for another season all thanks to its popularity! And it is also confirmed that the fifth season will be the season finale of the series.

According to the sources the production will begin in August 2020. Therefore we can expect Money Heist Season 5 somewhere in 2021. Although it might take a little longer than expected because of the ongoing pandemic.

Nonetheless all the wait is worth it when it is for a series like Money Heist!

Deadpool 3: 6 Marvel Characters Everyone Would Love To See Featured In The Movie