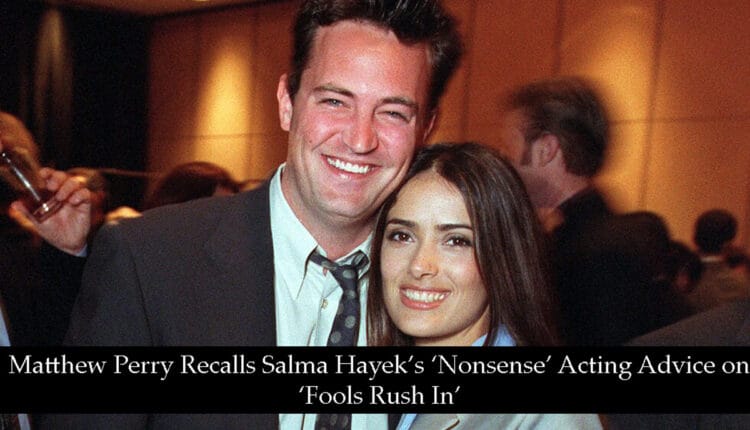 Matthew Perry has revealed that he is not eager to work with Salma Hayek anytime soon.

In 1997, Matthew Perry debuted in “Fools Rush In” where he worked with Hayek. Matthew, who is already a popular artist in the Hollywood industry has recently detailed his upcoming memoir, Friends, Lovers, and the Big Terrible Thing, which has revealed a dark reality about his life which includes his career.

When the actor was in the comedy sitcom, FRIENDS, he touched the glory of times. Still, FRIENDS remains one of the most-watched series and fans are still binge-watching the show. The popularity of the show is not undercover and everyone knows the big contribution of Matthew to it.

The new book has detailed his personal and professional life of him. Matthew has revealed every single detail about his experience being on the set and offset. The book is going to be an intimate sentiment for the actor and will be an eye-opener in his life. Matthew is known as a fun and sarcastic person who is known for his humor comeback.

Perry wrote that he tried to fall for a “funny sitcom actor” while waiting for “Friends’ ‘. He also revealed that he tried  “some fun strategies to tap into real feelings and to be more of a leading man.”

While talking about Hayek, Perry said that he had  “a very elaborate and lengthy idea”.

Perry added that Hayek had a “very elaborate and lengthy idea” to approach a scene in which Perry’s character tells Hayek’s character that he loves her. “There’s one scene in which I’m professing my love for her. She suggested that we don’t look at each other — rather, we should look out at our future together,” Perry penned. “After listening to this nonsense for about 20 minutes, I finally said: ‘Listen, Salma,’ I said, ‘I’m telling you I love you in this scene. You look wherever you want, but I’m going to be looking at you.’”

Perry noted that “her long-winded ideas weren’t always helpful” when discussing acting with Hayek. However, “Fools Rush In” is “probably my best movie,” Perry wrote, thanks to director Andy Tennant’s advice.

“I was bouncing around doing my funny little things, and [Tennant] would take me aside and say, ‘You don’t have to do that. You’re interesting enough to watch without doing that,’” Perry recalled. “That line of thinking allowed him to pull out one of the best performances of my career. Could this be a different way of saying Matty, you’re enough, the words I’ve been longing to hear my entire life?”