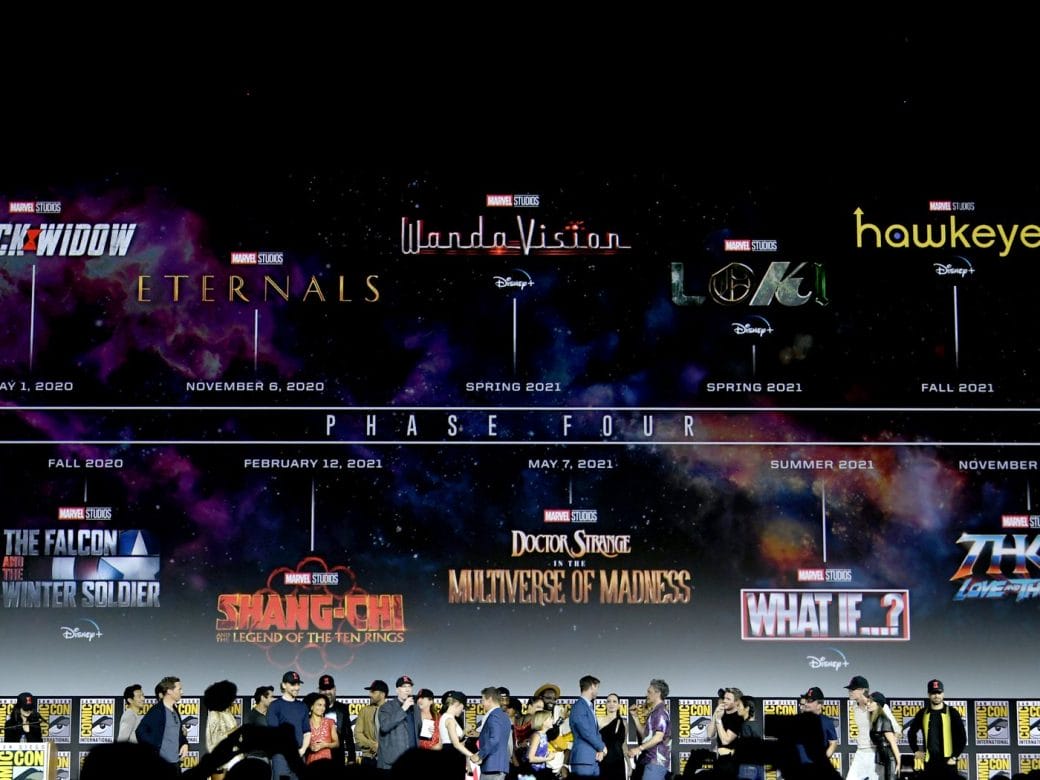 Marvel Phase 4: All The Movies And Characters

The Black Widow movie will open Marvel Phase 4 in 2020. The highly anticipated film is also the only one where the main character may not stick around for the future. Therefore, Black Widow is a prequel and all about honouring Natasha’s life. However, it will introduce new characters who may play a role in the future.

However, after the postponement due to coronavirus pandemic, the latest release date for the movie is yet to come out.

Shang-chi And The Legend Of The Ten Rings

Just announced in Hall H at #SDCC, Marvel Studios’ SHANG-CHI AND THE LEGEND OF THE TEN RINGS, with Simu Liu, Awkwafina, and Tony Leung, directed by Destin Daniel Cretton. In theaters February 12, 2021. pic.twitter.com/WePmw8d5Gq

The movie will come out on February 12, 2021. It will also focus on Asian representation in the MCU. Shang-shi is a kung-fu warrior who will also defeat the Mandarin in the film.

New Characters: Shang-chi, The Mandarin, and an unknown role by Awkwafinna.

Doctor Strange In The Multiverse Of Madness

Just announced in Hall H at #SDCC, Marvel Studios’ DOCTOR STRANGE IN THE MULTIVERSE OF MADNESS with Benedict Cumberbatch and Elizabeth Olsen. Scott Derrickson returns as director. In theaters May 7, 2021. pic.twitter.com/bVyOYjPLly

The film is releasing on May 7, 2021. Stephen Strange will go on an adventure with the Scarlett Witch. It may also be a darker movie in the franchise, according to the producers. However, we are not sure of any new characters in the film as of now.

The highly anticipated Thor film will come on November 5, 2021. It will feature female Thor for the first time. Fans are also exciting the movie in excitement to see where Thor is going for his next adventure.

Marvel Phase 4: All The TV Shows

arvel Phase 4 is unique from other groups because it will introduce TV series into the MCU. All the TV series will be canon to the larger story and will release on Disney+. Marvel also released a Big Game Spot for the first three series coming out.

The Falcon And The Winter Soldier

The first TV series is going to be The Falcon And The Winter Soldier. It will also show the Falcon taking up the mantle of Captain America and Bucky Barnes teaming up to defeat bad guys. Therefore, the show is coming to disney+ in Fall 2020.

Here’s the first official on-screen look at Elizabeth Olsen and @Paul_Bettany in the #WandaVision series! pic.twitter.com/Y7WTBPfnT9

Wandavision will be the second show to air on Disney+ in Spring 2020. It will also show Wanda and Vision trying to figure out and defeat their enemies. It will also involve some time-travel. Therefore, the movie will play a role in setting up the plot for Doctor Strange In The Multiverse Of Madness which will pick up right after.

Perhaps the most anticipated of all series is Loki. People are dying to see what the God Of Mischief is up to. Loki will air on Disney+ in spring 2020. Therefore, it will feature Tom Hiddleston in a parallel reality battling new challenges.

Just announced in Hall H at #SDCC, Marvel Studios’ WHAT IF…?, the first animated series in the MCU, with Jeffrey Wright as the voice of The Watcher, and many actors from across the MCU reprising their roles as voice talent. Streaming exclusively on Disney+, Summer 2021. pic.twitter.com/6aPhlQvMR9

What If…? will come to Disney+ in Summer 2021. It is an animation series which will take place in an alternate reality. It will show different outcomes of already existing storylines in the MCU. The first episode will also explain what will happen if Sharon Carter takes the Super Soldier Serum instead of Steve Rogers.

All the original actors of Marvel characters will be coming as voice-actors for the series.

The Hawkeye series will explore Clint Barton’s journey when he was Ronin. It will also introduce Kate Bishop to the MCU. The series will come sometime in Fall 2021 on Disney+.

Also Read: Avengers: Here’s How The Avenger Stars Are Quarantining Themselves

Marvel Phase 4: A Lot Of Firsts

Marvel Phase 4 is filled with a lot of firsts for superhero movies. First Asian superhero, first queer superhero, and so on. It will also set up the stage for the future ensemble of Avengers, and decide is there will be another Avengers movie in the future.