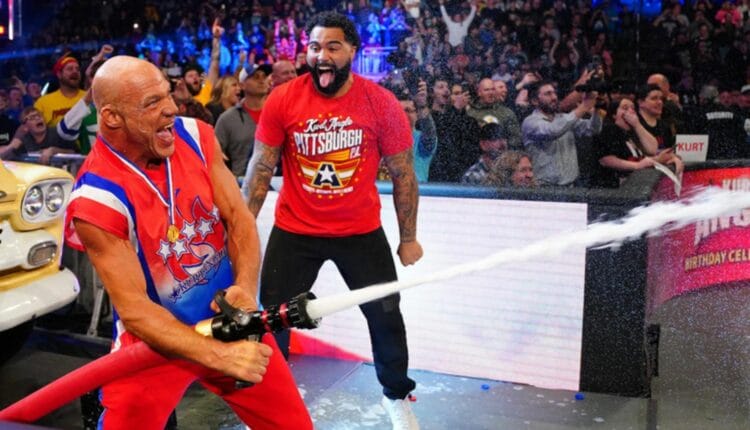 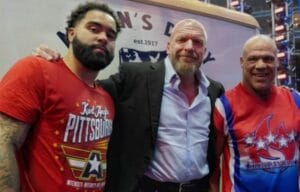 Kurt Angle Birthday: He Revealed Original Idea of His Birthday That Was Different From What Aired On Television.

Kurt Angle revealed his original plans for his Birthday Celebration On SmackDown. Kurt Angle shared his birthday experience on WWE SmackDown. He told that he was the one who approached WWE for doing something since they were in his hometown of Pittsburgh. He revealed that the original idea was different from what aired on television.

YOU MAY LIKE:- North West Dresses Up As Grandma Kris Jenner to Celebrate Her 67th Birthday

“Well, I approached WWE and I said, ‘Listen, your Olympic Hero is gonna have a birthday on December 9. You’re gonna be in Pittsburgh, WWE is gonna be a Pittsburgh, it’s a perfect time to celebrate my birthday.’ So they were like, ‘Yeah, yeah, we’ll think about it. They came back to me and they said, Okay, we’re gonna do something.’”

“They wanted me to do the milk truck segment again. They decided to have a bunch of heels talk about me during the show, all through the show, putting me down, and ripping on me. Then, in the end, they were coming out to the ring because I was supposed to have my celebration, I don’t show up, and the heels are in the ring with all the birthday cake and everything, and I come in with milk truck and I go down and I spray them down. I tell them, ‘Hey, you can’t have cake without milk.’ It’s awesome. When I was told this, I was so excited. Because that was my favorite moment in WWE. Driving that milk truck into the arena in Sacramento, California. It was my number one moment, I absolutely love that I had such a great time doing it. And it was an awesome moment for me to be able to do it again.”

YOU MAY LIKE:- Everything To Know About Rihanna&#8217;s Baby Boy So Far: From His Birthday To His Style

On, December 9, Kurt Angle celebrated his birthday at the close of WWE Smackdown.

Angle sometimes wear Gold Medal on WWE TV, but most of the time he wears just regular medals.

Is Kurt Angle the greatest wrestler of all time?

Kurt Angle is widely regarded as one of the best wrestlers of all time.

How much money does Kurt Angle make?

Kurt Angle earns an estimated salary of $2 Million per Year.

In order to conclude the article, We hope you enjoyed reading this article. We tried our best to keep you update with all the latest information regarding Kurt Angle and his birthday.

YOU MAY LIKE:- Amira Brie Wiki, Age, Height, Net Worth, Birthday, Relationship, Bio and Hobbies.

Kurt Angle is an American retired professional wrestler, Olympic gold medalist, and former collegiate wrestler. The greatest professional wrestlers revealed something that made him into the spotlight all around; On, December 9, Kurt Angle celebrated his birthday at the close of WWE Smackdown. Later, He revealed that the original idea was different from what aired on television.

Let’s Have A Look On Buffalo Bills players!