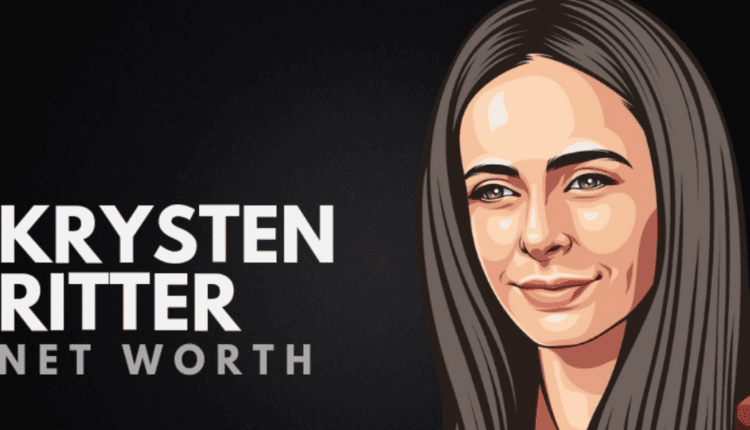 Krysten Ritter is a well-known name in the entertainment industry, having worked as an actor, musician, writer, director, producer, and model in the United States. Her net worth is now estimated to be $8 million.

She penned the screenplay for the film “Life Happens,” which she also co-produced, and she directed and co-executive produced the television series “The Girl in the Woods,” which debuted in 2021. In addition, Ritter directed the episode “A.K.A. You’re Welcome” that aired on “Jessica Jones” in 2019, and she was the producer of the television movies “Assistance” (2013), “Mission Control” (2014), and “The Demons of Dorian Gunn” (2018).

In 2012, Krysten and William Thomas Burnett, a buddy from their youth, released the album “Ex-Vivian,” and in 2017, she released the psychological thriller “Bonfire.”

Krysten Alyce Ritter was born on December 16th, 1981 in the city of Bloomsburg, Pennsylvania. Krysten Ritter is her birth name. She spent much of her childhood in Shickshinny, Pennsylvania, with her mother, Kathi, stepfather, and half-sister, while her biological father, Garry, resided in Benton, Pennsylvania. Her stepfather was an alcoholic.

Krysten went to school at Northwest Area High School and graduated in the year 2000. She was spotted by a modelling agent in the Wyoming Valley Mall when she was just 15 years old. While still in high school, Ritter worked as a model in the cities of New York and Philadelphia.

After moving to New York City, she began appearing in international advertisements and modelling for catalogues, publications, and runway shows in New York, Tokyo, Milan, and Paris. She signed with Wilhelmina Models and Elite Model Management, and she is represented by both of these agencies.

Krysten had a recurring role in the AMC series “Breaking Bad” from 2009 to 2010, playing the character of Jane Margolis, who was the unfortunate girlfriend of Aaron Paul’s Jesse Pinkman. El Camino: A Breaking Bad Movie, which was released on Netflix in 2019, had a flashback sequence that featured her role.

In the movie “Confessions of a Shopaholic,” which was released in 2009, Ritter played the role of Suze Cleath-Stuart. The following year, she made appearances in the films “She’s Out of My League” and “How to Make Love to a Woman,” and she also starred as Lily Champagne on the Starz series “Gravity.”

In the film “Vamps” (2012), she and Alicia Silverstone portrayed vampires who lived in Manhattan. In 2013, Ritter provided her voice for “Robot Chicken” and “The Cleveland Show.” That same year, she also had an appearance on “The Eric Andre Show,” and the following year, she had a guest starring role on “The Blacklist.”

She portrayed the title character on the Marvel series “Jessica Jones,” which aired on Netflix for a total of 39 episodes between the years of 2015 and 2019. In the 2017 Marvel miniseries “The Defenders,” she again portrayed the role of Jessica Jones.

Krysten first debuted on screen in the film “The Hero” in 2017, and she will portray Natacha, The Witch in the upcoming fantasy film “Nightbooks,” which will be released on Netflix in 2021. It was reported in September 2021 that she will play Sherry Cleckler, the best friend of serial murderer Candy Montgomery, in the miniseries “Love and Death” that would air on HBO Max.

Krysten’s romance with the singer Adam Granduciel began in August 2014, and on July 29, 2019, the couple became parents to their first child, a son named Bruce Julian Knight Granofsky.

Ritter is a vocal advocate for animal rights and has even participated in advertisements for the PETA organisation. She is a fan of knitting, and she was featured on the cover of “Vogue Knitting” during the late winter issue in 2018.

In 2012, Ritter was presented with the prize for Excellence in Acting at the Vail Film Festival. In 2016, she was honoured with the Webby Award for Best Actress for her performance in “Jessica Jones.”

As a result of her work in “Jessica Jones,” Krysten received nominations for a number of awards, including the Critics’ Choice Television Award for Best Actress in a Drama Series (2016), the GALECA: The Society of LGBTQ Entertainment Critics nomination for TV Performance of the Year – Actress (2016), and the IGN Summer Movie Award for Best TV Actress and Best TV Hero (2015). She was nominated for a Teen Choice Award in the category of Choice TV Villain in 2012 for her performance in “Don’t Trust the B—- in Apartment 23.”

In 2013, Ritter purchased a property in the Hollywood Hills that had been formerly owned by Hank Azaria for the price of $655,000. The residence has a total area of 1,100 square feet and two bedrooms.

Krysten and Adam acquired a property in the San Fernando Valley that was 4,040 square feet and cost around $3.1 million in the year 2020. The residence is designed in the style of a “modern farmhouse,” and it features built-in bookshelves, six bathrooms, five bedrooms, and multiple fireplaces.