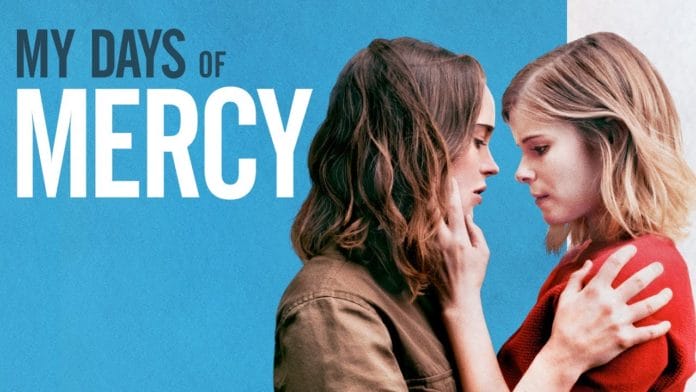 Are you a fan of love stories? If you are, I recommend you to watch this film. Even though it is based on a lesbian love story, the emotional moments in this film will make you fall in love with the movie. This movie exhibits all kinds of emotions in it and the story itself is a gem. This film lets you experience both: the joy and pain of love.

My Days of Mercy is a typical Montagues and capulets story in which two campaigners on opposing sides of a conflict fall in love. Lucy, who has spent the last eight years attempting to get her father off death row for the murder of her mother, is touring the country with her sister, Martha, to protest the current use of the death sentence in certain states.

Mercy, on the other hand, works as a lawyer who defends capital punishment, especially after her father’s police partner was killed and the perpetrator was sentenced to death row. The two ladies met as part of a rally to preserve the latter.

There isn’t much space for improvement in this picture, but if there is one thing I have a suggestion for, it’s the father’s guilt (don’t worry, no spoilers ahead). While the film never directly asserts whether he committed the crime or not.

It provides far too many strong hints to influence the audience. Given the amount of screen time dedicated to Lucy and Mercy’s relationship, as well as the pervasive topic of the death penalty, the film didn’t need to introduce another major issue.

Apart from this minor quibble, there’s virtually nothing wrong with My Days of Mercy. It’s clear that the film was created in the community, and that both the romance and the wider societal issues were addressed with the sensitivity and care that they both deserve. Don’t let yourself down; don’t pass up this opportunity.

The Plot of My Days of Mercy

Lucy Moro and her elder sister Martha are anti-death penalty activists who want their father Simon, who is serving a life sentence for the murder of their mother eight years ago, acquitted. The sisters live with their 10-year-old brother Ben at their parents’ residence in a tiny Ohio town and travel to different states in a mobile home.

Lucy meets Mercy Bromage, is a lawyer whose father is a police officer, at a rally outside an Illinois jail. Despite their political differences, Lucy and Mercy become closer to one another. They start talking on the phone and using Skype to communicate. Lucy and Mercy begin dating while on a single trip to a rally in Missouri.

Meanwhile, Martha is determined to rescue their father (who she still feels is innocent) and hires a lawyer, who can obtain a four-month stay of execution to investigate any legal flaws or new information that could allow the case to be reopened.

Lucy flies alone to Illinois to see Mercy after the last of Martha and Lucy’s legal appeals are refused and the evidence continues to point against Simon. Mercy still lives with her parents and has a boyfriend, which she discovers there.

Lucy ends her relationship with Mercy, feeling deceived and manipulated. Regardless, Mercy joins the sisters during Simon’s execution. Lucy works as a waitress in California six months later when she runs into Mercy.

Lucy rejects Mercy’s effort to renew their romance, stating, “I just don’t think you can come back into someone’s life like this.” Regardless, the two set up an uncomfortable date for later.

The casting of My Days of Mercy

Elliot Page, Kate Mara, Pablo Schreiber, Elias Koteas, and Amy Seimetz were cast in the film in August 2016, with Tali Shalom Ezer directing from Joe Barton’s screenplay. Christine Vachon and David Hinojosa, together with Mara and Page, served as producers for Killer Films, while Robert Halmi Jr. and Jim Reeve, along with executive producer Karri O’Reilly, would serve as executive producers for Great Point Media.