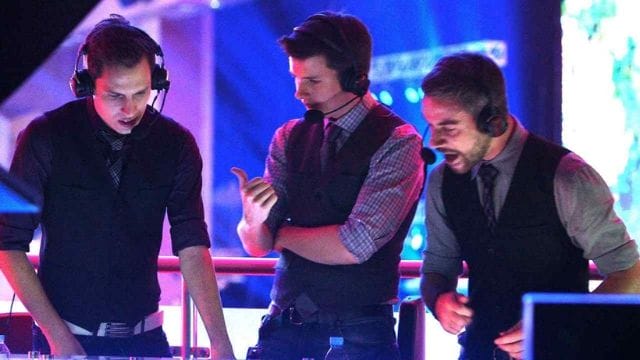 How to Become an Esports Caster: Tips From Pros

Back in the day, the esports sphere was considered a childish pastime. Now it’s clear that it is a whole sector that needs professionals from all areas to perform at a high level. You don’t have to be a pro gamer to join the field. There are many other professions where you can combine your passion for video games and your skills. Esports casting is one such opportunity.

An esports caster or talent (that’s what they are called in the gaming sphere) provides play-by-play commentary, shares an analytical view, and basically never stops informing the audience about what’s happening. Moreover, the role of a caster is vitally important. They need to help the audience tune in and keep it in the right mood during the whole event, no matter how challenging or boring the game may be.

Experts from WePlay Esports, the flagship company of the WePlay Holding esports group, give some tips on how to become a pro esports caster. Angela Bilonogova, speech and drama coach, and Oleksandr “Enkanis” Polishchuk, esports caster, share their expertise.

“There is a big difference between those who stream for their own pleasure and professional commentators. An esports tournament is an event that can last a week or even more. And almost every day, you have to commentate on the matches of different teams. Sometimes you have to talk non-stop for over an hour. Of course, it can be exhausting, but you have to keep giving your best so the fans don’t get even a hint that something is wrong. You have to keep the bar as high as it gets,” shared Oleksandr “Enkanis” Polishchuk.

The success of an esports tournament doesn’t really hinge on the teams’ performance or even the size of the prize pool. What is really essential is the event atmosphere. What will the viewer feel when they see the long-anticipated tournament? Will they continue watching the broadcast or only join for the finalists’ game? In many ways, the answer to these questions depends on the professionalism of an esports commentator.

“Esports talents need to assume different roles to match the unique concept of each event. They essentially create the event mood — this is their main goal. To achieve it, all commentators need to learn the basics of acting, and as speech and drama coach, I help them with it,” comments Angela Bilonogova, speech and drama coach at WePlay Esports.

Although the esports industry is very competitive, everyone has a chance to break into it. Ultimately, it all depends on how strong your motivation is and whether you are ready to put in the effort. If all the above is true about you, the following tips will help you start working towards your goal.

Before each match, commentators spend much time getting to know the teams better. This includes basic information about the teams: the players’ ages, names, analytical figures, how the team has performed before, how their previous match ended, and whether there was a roster change. Remembering so much information can be hard, and many make short notes for themselves.

“I always have something to say. If I had to rely only on the game, I would never have become a commentator.

Spectators have eyes; they see how the match progresses and who is in the lead. It doesn’t make much sense to just retell everything that happens on stage because any computer could have done it. Here, you need an individual approach. Suppose a new player joined the team. In that case, you as a commentator have to point this out, comment on some movements of the new player, and so on,” gives an example Oleksandr “Enkanis” Polishchuk.

Be the voice of esports

Broadcasting is a huge responsibility. A monotonous narrative will kill all the fun even if the commentator has excellent diction and a pleasant voice. The commentator must be enthusiastic and share that energy with viewers.

“In casting, everything is important, from breathing to facial expressions. The same phrase can be told as a joke or a serious statement. You can record your commentary to review it and enhance it further. Everyone can do some exercises even at home, but, of course, it is more effective to study with a teacher, so all your mistakes can be caught before they become a habit,” thinks Angela Bilonogova.

Be ready for anything

Esports tournaments are broadcast live, and there is no way commentators can take another shot. Technical problems, a twist in the game, or anything else shouldn’t distract a commentator from their work.

“In my classes, I devote a lot of time to improvisation. An amateur can be knocked off their game even by a torn-off button, while a professional must be confident regardless of the circumstances. You are always in front of cameras, and thousands of people see you. Your every movement, emotion, even blinking is visible, so you should always be ready,” points out Angela.

And most importantly, don’t give up. Many commentators started their careers working small tournaments for free. Your work deserves a reward in any case, but sometimes it’s worth taking a chance and trying to prove yourself before you get your first paycheck.

To commentate on The International (the world’s main tournament for the video game Dota 2) one day, you need to go a long way, and there will be ups and downs. Some don’t even go through the first year of such tests. It’s hard to try to perform at a high level when only two people are watching your stream. But if you can’t entertain even these two people, why do you think you can handle the mood of a thousand fans?

Esports attracts millions of people around the world for a reason. This sphere is a great opportunity to realize any of your talents or creative ideas. Thus, people will continue entering this industry in search of success.

To be among the winners — those who managed to find the right key and achieve steep heights — you need to be a professional.

“Never stop learning; forge your own path. If casting tournaments is something you do often, it can become a routine. What can you do to avoid it? My advice is simple: spend some of your free time watching different games, listening to other casters and analysts — everyone on the stage can be your mirror in various situations. Don’t try to copy someone else, but be eager to create your own style, which can include all the best practices of your colleagues,” shared Oleksandr.

Learn, train, communicate, repeat. Never stop developing, and don’t be afraid to try new things. The world is changing fast, and you need to keep pace with it!

Expensive Perfume: The Most Precious Perfumes That People Prefer!