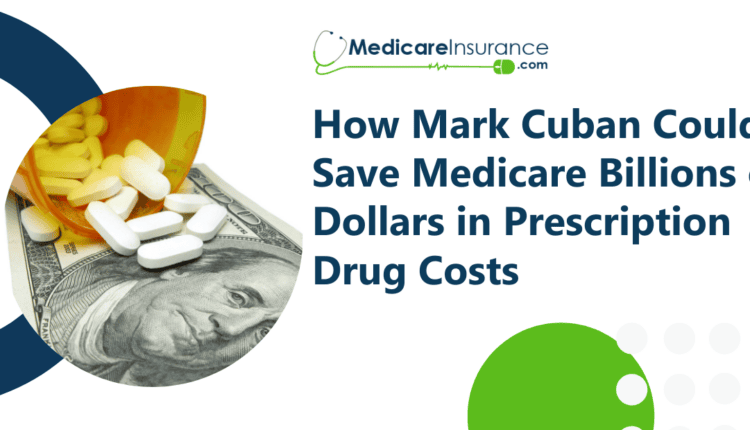 What’s the Story With Mark Cuban and Prescription Drug Costs?

If you’re approaching Medicare age, or even if you’re simply tapped into trending medical news, you may have heard about a story involving Texas billionaire Mark Cuban, and how his unique approach to prescription drugs could potentially save the U.S. Federal Government’s nationally regulated Medicare program several billion of dollars.

Although this may seem like a story straight out of a venture capitalist’s daydream, this story has been backed up by some of the nation’s largest medical researchers, including Harvard Medical School as well as Brigham and Women’s Hospital.

But just how might the Shark Tank judge pull off something like this? Well, the answer lies in Cuban’s Cost Plus Drug Company, which currently offers a selection of generic drugs at manufacturing cost plus a 15 percent markup, $3 pharmacy handling fee, and $5 shipping fee.

While this direct-to-consumer pharmacy model does not currently accept health insurance, studies conducted by researchers at Brigham and Women’s Hospital and Harvard Medical School claim Cuban’s model is evidence that Medicare is dramatically overpaying for its coverage of many generic prescription drugs.

According to a publication in the journal Annals of Internal Medicine, “The lower prices from a direct-to-consumer model highlight inefficiencies in the existing generic pharmaceutical distribution and reimbursement system, which includes wholesalers, pharmacy benefit managers, pharmacies, and insurers.”

So, how exactly did these researchers conclude that Medicare is overpaying for its prescription drugs? In the quoted study, researchers compared 2020 Medicare spending for a total of 89 drugs to the prices at Cuban’s Cost Plus Drug Co. during the same period. The findings were shocking.

Researchers estimate that Medicare overpaid for 77 of the 89 reviewed medications, resulting in $8.1 billion in expenses paid to provide funding for their coverage, compared to just $4.5 billion paid by Cuban’s Cost Plus Drug Co. for the same medications over the same time period.

Theoretically, this means that Medicare could have saved taxpayers and recipients a whopping 37 percent of its $9.6 billion budget allocated for coverage of the drugs under Medicare Part D. Keep in mind, that this number is generated using conservative estimations.

What Were the Limitations of this Groundbreaking Study?

Though these recent studies seem to offer a great deal of insight and transparency when it comes to how federal programs like Medicare are spending taxpayer dollars, there is much to be said about the limitations of the study and how these limitations may affect certain outcomes.

For example, the studies researchers assume that the federal healthcare program would have purchased drugs in bulk, buying the maximum quantity that Cost Plus Drug Co. offers for each prescription. Though this would likely be the wisest option, there is no concrete evidence that bulk buying is how such a system would operate.

Additionally, researchers could only compare prices for the generic drugs sold by Cost Plus Drug Co., which represents just 25 percent of the approximately $38 billion that Medicare spent on generic drugs in 2020. It also could not account for whether the cheaper drugs would mean lower out-of-pocket costs for Medicare enrollees.

There is also something to be said regarding moving a federally-regulated program like Medicare even further into the hands of the private sector, as doing so would likely give billionaire citizens like Cuban even more control over access to public healthcare.

Is the Government Willing to Work With Cuban to Lower Prescription Drug Prices?

Though Cost Plus Drug Co. did not launch until the start of this year, the study’s authors suggest that Medicare could save nearly $4 billion a year if it purchased its medications directly from Cuban’s online pharmacy.

Current law prohibits Medicare from directly negotiating pharmaceutical prices with manufacturers on behalf of Medicare recipients, though this has recently been challenged by the current administration.

One researcher and physician at Boston’s Brigham and Women’s hospital, Benjamin Rome, insists that Cuban and his pharmacy had no involvement of any kind in the study. Following its release, however, the Dallas Mavericks owner did retweet the study to President Biden and Several Members of Congress.

“Have your people call my people and let’s get this done,” Cuban’s tweet read. As of late last month, Cuban confirmed he had yet to hear back from any of the government officials he contacted via social media regarding the study.

For many in the private sector, getting Medicare recipients as much savings as possible when it comes to their healthcare costs remains a high priority.

If you’re interested in exploring your Medicare and Medicare Advantage options to potentially uncover where you could be saving money, don’t hesitate to contact the licensed insurance agents of our friends at MedicareInsurance.com via phone at (800) 950-0608 today.

What Are the Most Expensive Thing in the World in 2022