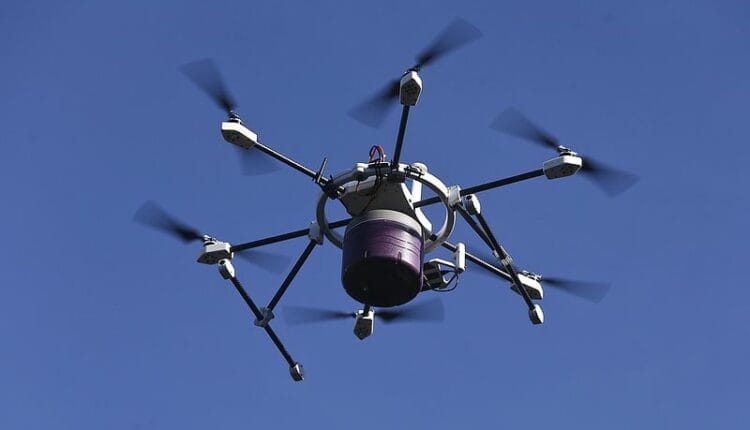 The drone is originally popular for its use in the military and in photography, but there’s one sphere where it’s quickly becoming the breakout star — delivery. It all started in 2016 when Domino’s became the first in the world to deliver a pizza by drone. Major retail companies like Amazon and even UPS soon picked up the trend to solve the issue of last-mile deliveries.

In 2019, Walmart became the latest in this slew of companies investing in delivery drone patents. The major American store chain finally unveiled its unique iteration of the service this year. Here’s everything you need to know about the service.

After filing its patents in 2019, Walmart took its drone delivery service a step closer to reality by investing in drone provider DroneUp in 2021. The Virginia-based company services public service organizations in over 11 states. In 2020, it worked with Walmart on pilot tests that delivered at-home COVID-19 self-collection kits.
In November 2021, Walmart’s official drone delivery service launched at a single location in Arkansas. Today, they’re rolling out their program to over 6 states, making the service available to over 4 million American households located within 10 miles of a Walmart outlet. Customers can now order over 100,000 different products by drone ranging from batteries and toiletries to medicines and snacks.

Walmart charges $3.99 for each delivery. Customers who live near drone-capable stores can order between 8 AM and 8 PM. These orders can weigh as much as 10 pounds, with Walmart with the simple principle “if it fits safely [onto the drone], it flies.” Orders are packed into boxes at the store and loaded onto a claw-like mechanism on the drone. Remote drone operators then use drone camera sensors to get an accurate fix on and clear image of the correct lawn or driveway.

From here, orders are lowered onto the receiver’s property using a cable and are released by the claw. These drones use the latest Wi-Fi 6 and 5G technology. We’ve lauded them as being among the breakthrough technologies of last year thanks to their ability to make drone operations smoother and more secure. As a result, the entire delivery process takes as little as 30 minutes

As Walmart hits a new milestone, experts say there’s still a lot that needs to be smoothed out. Most crucially, US drone laws currently require drones to be within an operator’s line of sight. Though this is something that may hinder the expansion of Walmart’s drone operations, DroneUp CEO Tom Walker believes it won’t remain an issue in the long run.

“The important thing I say to the community is we don’t need to immediately go from the visual line of sight to unlimited [beyond visual line of sight flying],” Walker concluded. “We need to make incremental changes. How can we go from here to a little bit further, then a bit further than that, and maintain safety while determining an acceptable level of risk?”

Walmart’s extensive network of branches also gives it a major advantage over companies like Amazon, which also offers drone delivery services. This is further aided by the fact that Walmart has thousands of products readily available regardless of supply chain issues. Finally, proponents of the service point out that it remains a viable and sustainable alternative to delivery via fossil fuel-powered vehicles

Many companies before Walmart have paved the way for drone delivery. However, it’s the retail chain’s unique selling points that are truly propelling the delivery drone into the future.

Riverdale Season 7: CW Has Announced the Renewal of the Show!