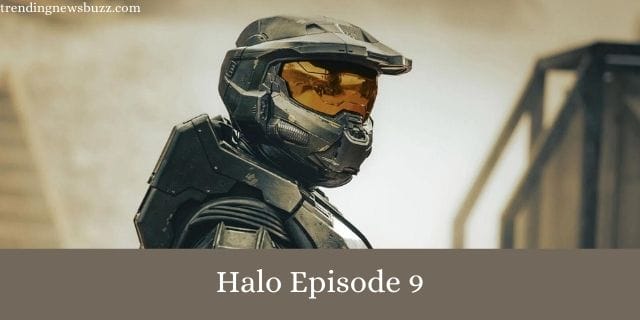 In the penultimate episode of Master Chief’s travels, every major character chose a side and prepared to confront the Covenant. War is coming! USNC relies largely on Master Chief and his connection to Makee, but they are unaware of the refugee drama that occurs. Here is the Halo Episode 9 Release Date and Synopsis.

Makee and Master Chief are both troubled by their shared mental image of the Halo ring as Master Chief guides Makee throughout Reach while still being discreetly observed by Halsey through Cortana. This brief expedition is cut short when the United Nations Security Council discovers that the Covenant has annihilated a frontier colony on another planet.

After accepting the impacts of the Madrigal artefact in its entirety, John begins to associate with Makee and views her as a potential ally based on their shared perspectives of the Halo. Despite the persistent misgivings of the UNSC, who view her as a dangerous enemy brainwashed with Covenant ideas after years in their custody, she is released.

John learns from her that the Covenant is after the Halo rings because they believe activating them will lead them to godhood via the “Great Journey.” John can convince the UN Security Council to allow Makee to test the artefact, albeit under Miranda’s supervision, after a Covenant attack on another planet. Without his emotional suppressor, John has sex with Makee, who likes and trusts him; watching John’s generosity and resemblance, she begins to question her allegiance.

Halsey discovers John’s connection via Cortana and regains remote access to the UNSC network by utilising Miranda’s previously stolen retina scan. Halsey believes that she should have exclusive access to John, Makee. The artefact launches remote protocols that shut all communications within the UNSC base and forces Spartans Riz and Vannak under her direct control to seize all three targets; at the last moment, Cortana chooses to notify John and aid him.

Riz and Vannak subdue Kai and seek to engage John in combat (though Kai breaks free and fights John). Makee tries to assist John before Miranda exposes her as the assailant aboard the lost UNSC vessel by analysing the cleaned signals and revealing her identity. Makee proclaims her allegiance to the Covenant, frees herself, and touches the artefact, sending shockwaves through the UNSC base, before bidding farewell.

Halsey employs the Zed Protocol, which establishes a backchannel to the Spartans while severing all other links, when she understands that Makee will not assist her voluntarily. Halsey instructs Kai, Vannak, and Riz to locate Master Chief, Makee, and the artefact, and bring them to her. This enables her to communicate with them solely.

Halsey interrupts Kai’s complaint about not having the emotion-suppressing pellet and asks Vannak and Riz to eliminate Kai and continue the mission without them. Halsey informs Cortana that she will soon be able to fully manage Master Chief, which is Cortana’s desire. Cortana hesitates and claims she is not sentimental.

Master Chief appears in order to test Makee. Miranda deduces that the voice on the Covenant tape is that of Makee, hinting that she is a forger. Miranda flees, unable to communicate with anyone, to reach the testing site in time and prevent Makee from touching the artefact. Master Chief and Makee have fallen into a trap set by Riz and Vannak.

Halsey informs Cortana that he will drop Master Chief and assume control over his physical processes. Cortana betrays Halsey and warns Master Chief not to fall into the trap that has been set for him. Cortana then disconnects Halsey from the UNSC and disappears to aid Master Chief. While Master Chief deals with Riz and Vannak, he instructs Makee to grab a Marine and rush to Parangosky.

Where Can I Watch Episode 9 of Halo?

If you intend to stream Halo, Paramount+ is your only option. This is a special programme only available on this platform. Additionally, Paramount+ will cost you $9.99 per month if you wish to subscribe. If you want to save a few dollars, however, you should purchase the annual package to receive a 16 percent discount and live access to CBS.

Halo Season 1 Episode 9 will premiere on Paramount+ on May 19, 2022. First, the episode is titled Transcendence and was written by Kyle Killen and Steven Kane. The director of this episode was Jonathan Lieberman. Second, each episode has an hour-long duration.

Transcendence will serve as the season finale of the premiere season. With this information, Otakukart concludes its coverage of Halo’s initial season. Thank you for your time and enjoyment of streaming.