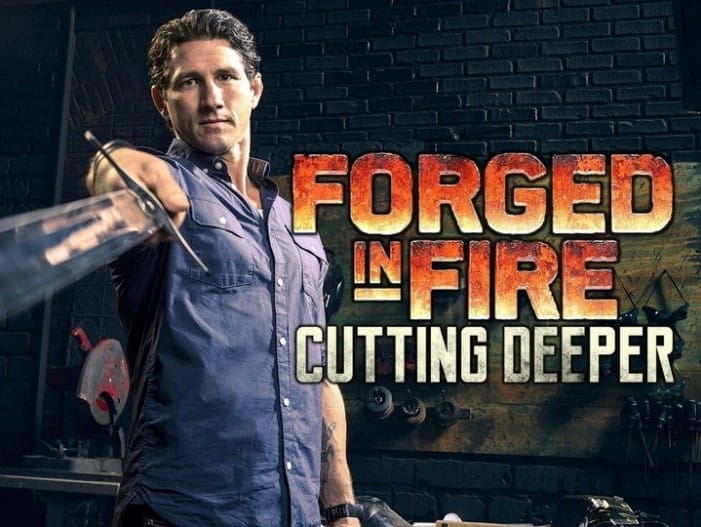 Forged in Fire: Cutting Deeper: What is it about | Release Date |

Here you will get to see some serious stuff happening in a metal forging competition.

There was a time when TV shows were nothing more than a daily soap, and even we as the viewers watched it to better digest our dinner or just to pass our evening and night time before finally going to bed.

But things started getting serious when the “reality shows and competitive shows” entered the league of daily soaps about a decade ago.

One such remarkably awesome show was Man VS Wild, and I don’t need to remind you how wide acceptance it received around the world.

Let’s fast forward to more recent times, like the past few years when it became quite serious (much more than dinner time) and started influencing our lives directly by making us copy trends, using their lines in our daily lives to sound cool much more.

A snapshot of Forged in Fire: Cutting Deeper

But above all this, the actual reality remains the ultimate king and shall always prevail. Forged in Fire: Cutting Deeper is quite a serious and an “actual” reality show where the real bladesmiths (the art of making knives, blades, daggers etc.) take part in the competition.

Unlike fun and entertainment channels, this one is aired on History channel, and channels like History, Discovery, Animal Planet take the seriousness another step further.

Forged in Fire: Concept of the show (Plot):

Produced by Outpost Entertainment, Forged in Fire is a multi-episodes competition show where four bladesmiths fight for the title “Forged in Fire Champion”.

In a total of 3 elimination rounds of forging best-bladed weapons, the winner takes 10,000$ along with the above title.

They call the set as “The Forge”, and this place is equipped with some serious stuff such as forges, grinders, power hammers, hydraulic presses and more.

But as they say, “with great power comes great responsibility”, keeping this in mind, the makers have made sure an expert doctors team is always present if something goes wrong.

If a particular contestant isn’t being careful enough, it might harm themselves or others present, they may even face a direct elimination without requiring bad forging skills!

Instead of the original theme of Forged in Fire, the special episodes forged into Cutting Deeper are an enhanced version of the show. It is made up of special/bonus scenes from the older episodes. Including additional tips from the judges like Dave Baker, the show also highlights what happened during the forged weapons testing (you may want to call it a behind the scenes thing).

Cutting Deeper first aired on March 28, 2017, with “Night of Redemption” being the show’s opening episode, it ended on July 4, 2017, with “Champions Night” as the final episode out of a total of 6 episodes.

As they say, no show can survive without great viewers retention, Forged in Fire has multiple seasons and multiple special episodes, so one thing is clear, we’re loving this concept!

Are you looking for the Forged in Fire: Cutting Deeper Season 2? If yes, but the problem is you could not find much information about the same anywhere else, then this could be your final stop for wandering.

Currently, the makers have made no official statement for Cutting Deeper Season 2 as it was a mere special episodes collection. But if they can manage to merge older videos once and get a fine viewership, why not do it again?

Season 8 began on November 18, 2020 and is still going on. Once it ends and the makers want to take a rest without losing the viewership, they might release another Cutting Deeper special episode with the Season 8 bloopers and bonus videos.

Wrapping Up: What to do Next?

I hope all your doubts about Forged in Fire: Cutting Deeper have been solved in this article.

Now we can only do one thing about it: wait for another Cutting Deeper season.

Until then, the platform is open to all and any other query related to any movie, series, or game that you like. Feel free to checkout-the website, and get all your queries solved.

Can an 80 Year Old Get a Mediclaim for Senior Citizens?