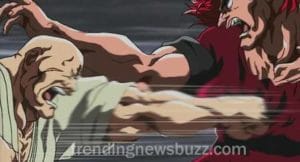 A man with Marks on the Face is Doppo Orochi. He has been training in martial arts for 50 years. Out of all the aged characters, he is the most humble and caring man. His wise nature has always attracted the viewers towards him. He has once fought with Yuujiro Hanma and also lost badly with him. The fight even made his face go worse after Yuujiro injured it badly.

He owns a Karate academy named Shinshinkai Karate and his devotion towards the academy and his children are unbearable. After losing the fight with Yuujiro, he decided to close the academy and train himself hard enough to never lose. Doppo made a promise to himself and also to his students. He started his journey in search of the strongest fists.

He even says that “it’s my duty as founder of the Shinshinkai Karate dojo to fight him”.

In the anime, you will see that a large number of people see him as an Idol. His respect for the work he is doing is amazing. All this popularity is still not enough to make him proud, he is still a humble man.

In the 56 years, the old man was never really afraid of anyone, and once he fought with the tiger in order to be strong. Despite all his hard work, he is never satisfied with his capabilities and wants to work more on himself. His wife, Natsue Orochi, always cares for him and wants him to go slow with his training.

Moreover, During the fight with the monster Yuujiro, Doppo lost one eye and is about to die. The tournament stopped and the doctor even thought that he was dead. The Audience was worried for him and after some time, he became alive.

His kindness in the story is worth checking and he even adopted a child Katsumi Orochi. His fighting technique involves judging his opponent at this first sight. This technique helps him to understand the moves better.

Furthermore, Doppo knows more than a hundred tricks that help him during a fight. In the next upcoming season 4, we will see the growth of this character.