After months of speculation, we finally know when the anime film Demon Slayer: Kimetsu no Yaiba the Movie: Mugen Train will release in North America. At the New York Comic Con Metaverse panel, Aniplex of America and Funimation announced the release to take place sometime in the first quarter of 2021.

Before North America, the sequel film to the Demon Slayer: Kimetsu no Yaiba anime series, the upcoming anime film will release as early as October 16  in Japan.

The release will be limited to 38 selected IMAX Theaters. Because of the COVID-19 pandemic, IMAX theaters were closed. So, this will be the first Japanese film in 2020 to screen in the IMAX theaters.

The staff members of the anime series, Demon Slayer: Kimetsu, Yaiba, returns for the upcoming sequel film. And as for the distribution, Aniplex of America & TOHO have the rights to distribute the film.

If you’re planning to go to the IMAX, there’s an additional perk for you. You’ll get a copy of the “Rengoku Volume 0” manga volume. Right after the release, the manga series is available to a limited set of audiences with 4.5 million copies. Written by Koyoharu Gotouge, this manga features the first mission of Rengoku.

Gotouge is the creator who created Demon Slayer: Kimetsu no Yaiba manga series, which later premiered as an anime series between April 2019 & September 2019.

Before you watch the upcoming Death Slayer film, its super important for you to know the premise.

And for that, you need to watch the anime series first. Demon Slayer: Kimetsu no Yaiba anime series is available to stream at these Netflix anime sites.

Now, before you go and binge-watch the complete season, take a look at the plot summary:

The anime series told the story of kind-hearted kid Tanjiro from the Taisho Period in Japan. He sells Charcoal for a living, and one day, he witnesses his family getting slaughtered by a demon.

Even that wasn’t enough. Her younger sister, the only sole survivor, turned into a demon.
Now, to get his revenge & turn his sister back into a human, he sets on a journey to become a “demon slayer.”

Will he be able to take revenge? Turn his sister back to humans? To find the answers, you can binge-watch the complete Demon Slayer: Kimetsu no Yaiba season 1.

Aniplex of America is shipping limited Edition blu-ray disc of the Demon Slayer anime series. The Blu-ray disc is divided into 2 volumes. The first volume included the first 13 episodes that released way back on June 30.

Now, for the second volume, it’ll include episodes 14-26 & Aniplex of America will start its shipping from November 24.

To further distribute the blu-ray edition, Aniplex of America has partnered with Funimation.

Demon Slayer manga series debuted in February 2016 edition of Shueisha’s Weekly Shonen Jump magazine. It ran for 3 months and then finally concluded on May 18. As of October 2020, there is a total of 100 million copies in circulation.

In this year’s 45 and 46th issue of Weekly Shueisha Jump magazine, Ryōji Hirano will release a short manga series as a spinoff to the Demon Slayer manga series. To read the upcoming spinoff manga right after its release on October 12 & 17, keep checking mangahere, a #1 place to read all the latest manga.

That’s all for now. If you’ve further questions, let me know via the comments section given below or shoot us an email at our official email id. 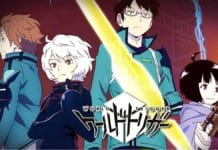