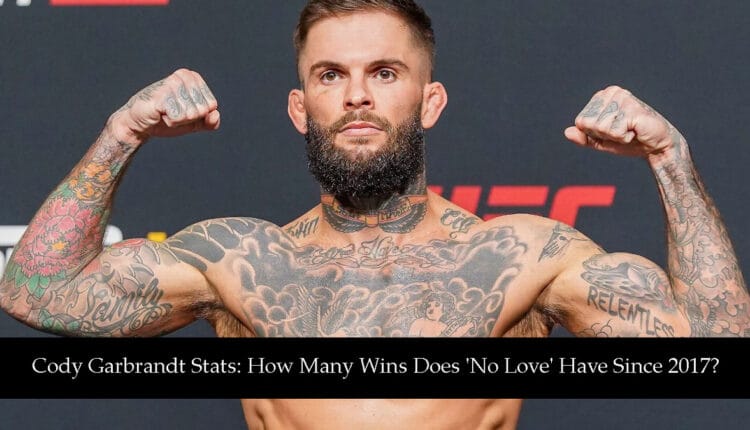 Cody Garbrandt has seen a lot of things in the past and one of the biggest things that the man has gone through is regarding the struggle to compete against his fellow players. Cody Garbrandt, an American Mixed Martial Arts artist, won only once in 2017.

The professional martial art artist is currently in the flyweight and bantamweight divisions of the Ultimate Fighting Championship. Garbrandt is a former UFC Bantamweight Champion

His fellow artist like Kai Kara-France, Rob Font, and Pedro Munhoz struggled and come out better of him. And his most recent outing with T.J. Dillashaw  showed him some unexceptional things.

Cody has only got to hand loss to Garbrandt in 2017. Ever since then, the artist has struggled to win against him. Cody tweeted “This dude is a bitch. 10 days before our first fight the UFC flew me to Las Vegas to get epidural shots in my back because I couldn’t even walk I didn’t make any excuses or cry about it after I lost this cheating bastard. Me vs Tj book that shit can’t save you anymore.”

On October, Cody Garbrandt’s fight was scheduled with Rani Yahya. Earlier, he lost with Kai Kara-France at UFC 269 which ultimately took him to this fight. The fight was pushed back and both the fighters shared the equal blame on it.

Cody Garbrandt started his journey as a fuighter in December 2012. His first fight was against Charles Kessinger while they were fighting under Pinnacle Fighting Championships. Later ‘No Love’ took the opportunity and defeated him.

Nick Carter Reacts to Death of Younger Brother Aaron: ‘My Heart Has Been Broken’

Kanye West alleges Jewish doctor might have wanted him dead