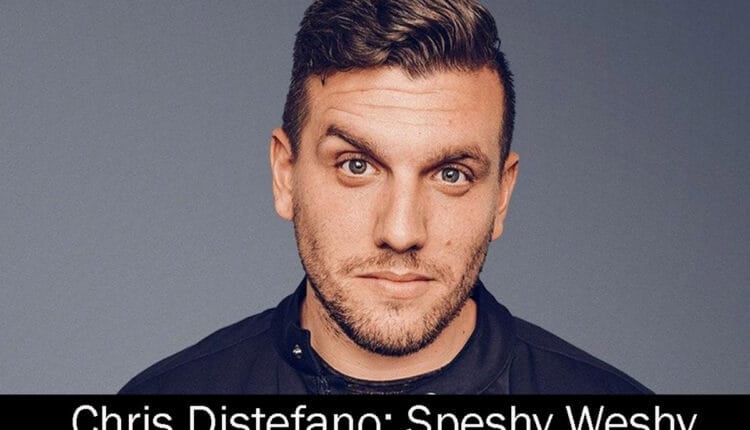 Entertainment gives us pleasure and there is no doubt that people love to watch funny shows, and hear crazy music to escape reality, However, there is a huge difference when it comes to entertainment, Many shows and series are already worth binge-watching but there are some which can’t be watched more than one time, despite them being good. Something similar happens with stand-up comedy, unlike the signs which can be heard multiple times, Jokes can’t be listened to after one time. That’s why we have Chris Distefano: Speshy Weshy show on Netflix.

It’s been seen that Netflix has been loving stand-up comedy for the past several years. In 2022, there have been numerous shows that have been launched on the streaming platform including Chris Distefano: Speshy Weshy.

It is the first comedy special by the comedian and there has been huge talk regarding it on the internet. Fans have loved and hated the jokes that he speaks on the platform. In 2017, the comedian was fired by Netflix after co-hosting Ultimate Beastmaster Season 2.

Fans were surprised after watching the same person on Netflix and dealing with the crazy jokes that he had made over the situation of that time. Now, Chris Distefano is here with his show where he speaks about his own experience with Netflix and criticizes the company, and gets paid for it. I mean, what?

In this article, we’ll be going to share everything about the young comedian and will go through his show in detail. If you are someone who hasn’t heard or watched the show yet and wants to watch it exclusively then read this article till the end. It’s not the first time when we all are watching the comedian in the show. There is rarely anyone who has not heard about Chris Dostenfano in the past. The comedian has already worked in many comedy shows and there have been thousands of people who loved his work in those shows. Chris has been there on shows like Comedy Central, Size 38 Waist, History Hyenas, and his podcast.

There were sayings that earlier, the comedian was already ready to launch his idea of this show on youtube. Chris has already proposed the idea of releasing the show for his fans however fate changed and he was struck with the company that had fired him earlier. Netflix decided to broadcast its exclusive show on its platform. Unlike the other comedy show, Chris Distefano: Speshy Weshy is a fun comedy show which runs more than 1 hour.

As the series is already released on Netflix, there has been a huge conversation going around regarding the comedian. The show is light, fun, and joyful. Many people complained that the show was short and they were desperate to hear the comedian more. Overall the comedy series is simple and generous, it has dark jokes, a great sense of humor, and amazing performance. In the beginning, the comedian came and announced that he already had six martinis before arriving at the show and despite encouraging himself not to drink, he drank.

He later started to make some dark jokes about the war. He joked about the ongoing conflict around the world and also said that once her daughter asked why his teeth are yellow, to which he replied that he supported Ukraine. He further makes satirical comments on how the population of white people keeps increasing around the world and this is causing them to become the majority. Chris remarks that in 2025, the government will ban producing white children.

The comedian remarks on today’s social media and PC culture and tells the audience how it is becoming vaster. The fans; ready know that he has been called out on Twitter multiple times but the comedian didn’t hesitate to add this in his show also.

It’s great to see how he can pull over a joke and extend it further. The viewers won’t find anything besides entertainment. It would be wonderful that there are already thousands of things that the viewers find amazing. The character development of the comedian attracts the public and his charismatic personality makes them stay longer.

His jokes are short yet laughable. They have clear and unique ideas. We already know that it’s hard to make jokes about certain things but he managed to make everyone happy.

One of the major negatives anyone can feel about him is his dark jokes. Anyone who is not okay with jokes on serious topics may find him irritating. In the show, we have seen that he takes the Ukraine-Russia War and further extends on some serious topics. But that’s what dark jokes are all about. The basic thing here is that not everyone found this funny and there might be people who were annoyed with those jokes.

In the show, he tells how he introduced everything to his daughter. From Pandemic to the Russian-Ukrainian War.

Where can I watch the Official Trailer of the show?

There is no official trailer for the show but here is a video from the comedian which can help you. Netflix has not released any trailer from their comedy specials but the comedian himself has already released the video on his YouTube account.

Fans loved the video and commented, “One of the best comics performing!! Learned about him through The Bonfire. You hear the voice and have an expectation (like he said when he was in the doctoral PT program), the skill and quick wit is insane. His (drunken) story of 9/11 is a classic on YouTube.”

While others said, “I’ll be getting Netflix activated again so I can see it this month. Follow all the podcasts for you east coast comedians. I’m in NJ so I love the blunt jokes to the cranium. Lol, love what I’m seeing. The teaser is awesome!”

Like this article? Go through our website Trending News Buzz and get all the exclusive details about the latest happening around you.