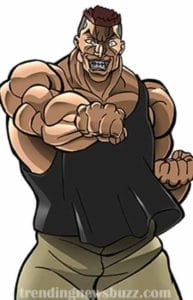 Atsushi Suedou is a minor character of the Baki series but plays a significant role in the story. The fictional character has improved himself over the years. He was the first person to fight with Baki and he lost badly.

Initially, his character was more like a self-sufficient guy who is full of himself but as he loses the match with Baki under the Underground Arena Saga, he comes down. After losing the fight, he became a good friend of Baki and even motivates him throughout the show. Not to forget that he is not very fond of Baki initially and used to hate him.

Atsushi Suedou is also a good friend of Katou and even motivates him. He thinks of him as a small brother and whenever anything happens with Katou he is the one who goes to him. During one of the seasons, when Kataou was almost going to be dead because Kaiou Dorian tried to murder him. He was the one who saved his little brother. Suedou didn’t think twice and jumped right in to fight with Dorian even though he knew that it would cost him his life. 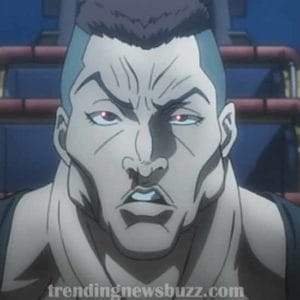 He has been training the Karate under the guidance of Doppo Orochi. During the starting training days of his karate under Doppo’s academy. While many of the fans will admit that they were not a big fan of him in the starting season. He was an arrogant and disrespectful guy who never really treated anyone nicely. After he fought with Baki he got an improvement in his behavior.

Moreover, he even disrespected Doppo and thought that he was not good enough. But after a while, he treated him as a god.

The most remarkable memory of Suedou was when Yuujiro and Doppo were having a fight and Yuujiro was insulting Shinshinkai Karate, Suedou was the one who jumped right into the battlefield to oppose and defend his  Shinshinkai. For him, Shinshinkai is the strongest karate in the world, even if he doesn’t know much about it.

But he has to pay with this move as Yuujiro throws him away with one punch. But this foolish move made Doppo realize how much he values his teacher and Shinshinkai school.