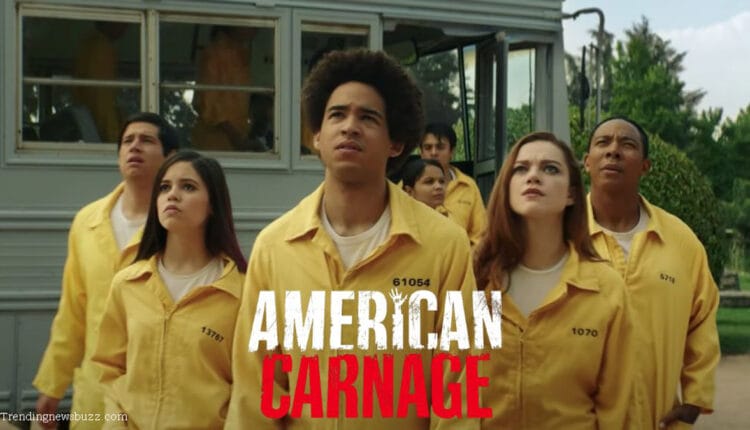 The wait is finally over! American carnage has exclusively released its first official trailer of their movie. Since being announced, the American carnage has always remained a hot topic. Julio Hallivis and Diego Hallivis have worked in this film where Diego worked as the director of the upcoming film and worked closely to govern the movie for a better direction. Starring JP as the main lead, the actor played the role of Jorge Lebdeborg who has been assigned to be arrested after the governor’s order.

The official trailer already has many discussions among the fans. JP has been assigned the role of the main protagonist and we know that he won’t be getting anywhere without many sure to do things precisely. Also, besides the teenagers, the government announced taking care of the elderly couple and they should be safely sent to the elder health care center. However, it seems like things are pretty much messed up inside. The official trailer already hinted at the possibility of many things that are unknown to the main character and us. This gives a reason to watch the movie in the theater.

In this article, we’ll be going to read about the upcoming film and will detail everything about the movie. Continue exploring the article to find out more.

American Carnage Release Date: When is it going to be released?

American carnage is officially released on July 15, 2022. The officials have announced the exact release date for the upcoming movie. It’s been also revealed that the movie will be released in the theater and digital force.

You may also like: Komi Can’t Communicate: Will There Be Season 3 to This Fantastic Shoujo Anime?

American Carnage Plot: What is it about? American Carnage focuses on the government issuing the law that forces the arrest of immigrant children. The official synopsis of the movie reads, “After a governor issues an executive order to arrest the children of undocumented immigrants, the newly detained youth are offered an opportunity to have their charges dropped by volunteering to provide care to the elderly. Once inside the eldercare facility, the volunteers discover the governor and the facility’s supervisor have cooked up a horrifyingly depraved conspiracy that endangers the young and the old in this twisted thriller-comedy.

You may also like: The Menu Release Date: Mark Brings A Unique Concept With His Upcoming Film

The story follows JP, whose role is played perfectly by Jorge Lendeborg Jr. He is the main protagonist of the movie and along with this, we have some other additional characters. In the movie, you will be going to meet Jenna Ortega, Allen Maldonado, Bella Ortiz, and Eric Dane.

American carnage is an upcoming film that has officially announced its release date. The movie has been scheduled to release on July 15, 2022. The film follows Jorge Lendeborg as the main lead along with Jenna Ortega, Allen Maldonado, Bella Ortiz, and Eric Dane in the supporting role. The official release date has been scheduled and the movie is ready to premiere in the theater and the digital platform.

Like this article? Share with your friends and family and let them learn about the upcoming movie. Also, visit Trendungnewsbuzz and get all the latest updates about the recent happenings around you.