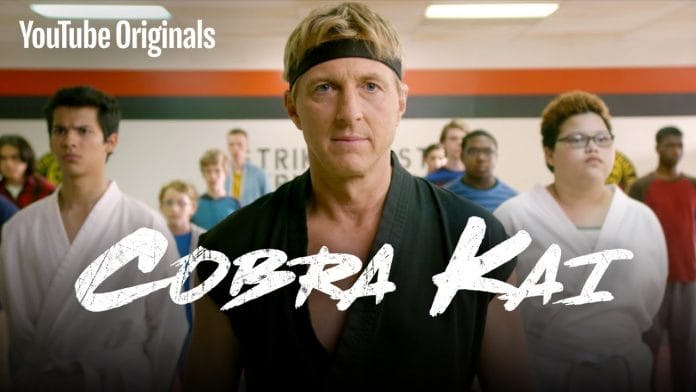 Cobra Kai Season 3: Release Date, Plot. Will Johnny Lawerence get Dojo Back? All The Latest Updates!

First and foremost, I cannot be friends with someone who doesn’t have knowledge about the steaming-adventure drama Cobra Kai.

I mean, how can you not watch their episodes? What’s better than seeing skilled men fight with each other using proper martial arts?

I’ve had this conversation with a few friends. They’re not my friends anymore.

Kidding! But honestly, Cobra Kai is, what do you call it? Yess, ‘daa shizzz!’

It’d be absolutely worthy saying it has grossed a million viewers right after it’s release on YouTube Premium.

Having notched a successful rating, since its first episode that aired on 2nd of May, 2018, Cobra Kai has been going strong. So the story goes this way- Johnny and Daniel are skilled in Cobra Kai and Miyagi-Do respectively.

They both had the same ex-girlfriend back in high school. They both are experts in their own profession.

Both of them have a seemingly disconnected life with their families.

They are fierce, and powerful and focused on winning since the battle now constitutes of their ego. Fragile, that is.

Johnny once saved a high school neighbour from getting bullied by a group of people. Immensely impressed and inspired, the guy, named Miguel pleads Johnny to tutor him.

Likewise, Johnny attracts a few other bullies who suffer from acute low self-belief and transforms them into intense Cobra Kai masters.

Also Read  Criminal Minds Season 15 Is Going To Release On Netflix , Interesting Plot , Who Is In The Cast ,Latest news
Also Read  Star Trek: Personal Signature Maneuver For Every Character

On the other hand are Daniel and his series of students, including Samantha(his daughter) and Robby(Johnny’s son).

He trains them enough in Miyagi-Do to have them give a slapstick competition to Johnny’s students, in particular. The increasing rage between Johnny and Daniel are broadcasted through their respective students fighting against each other, in Dojo, in school, and in relationships.

What To Expect In Season 3

Jon Hurwitz, the series creator had uploaded a picture on Twitter on the 6th of December, 2019.

This was regarding the wrapping up of the shooting for Season 3.

A few fan theories have been put up, out there regarding Johnny’s getting back the Dojo.

One thing is for certain, that Johnny now has to balance out his career. John Kreese comes back to form and we might get to unravel a few pieces of his apparent history in the warzone.

Daniel, on the other hand, travels to Japan. This might lead to the homecoming of some former characters of the franchise.

The third season was supposed to hit by now, but we are guessing the life-wrecking pandemic has paused the work.

Cobra Kai is easily the best show on YouTube Premium.

In fact, its second season made our list of the best shows of 2019!

But Season 3 has yet to premiere, and now the show has run into a new obstacle.

According to a new report, when the next chapter in the Karate Kid sequel series is finally released, it will likely be on a different streaming service and not YouTube anymore!