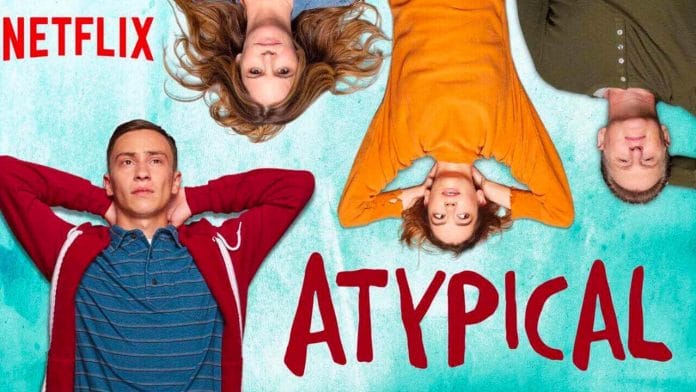 Atypical is a teen comedy-drama series created by Robia Rashid for Netflix.

The show is very different from other teen shows that we’ve seen on Netflix. The story focuses on the life of a teenager(18-year-old) Sam, who has autism spectrum disorder. It is such a heartfelt at the same time fun story to watch. Sam is a teenager who’s ready to experience love in his life. But for that, there’s a lot of work to be done. First, he needs to be independent. Sam’s family consists of his mother, father and a little sister. They need to adapt to Sam’s changes as he’s growing up. He must also adapt to change and explore what’s it like to be ‘normal’.

The show was initially released in August of 2017. It completes it’s the third season on 9 November 2019. The show has been so popular since it’s release. The series somehow directly connects to the audience and has a very emotional touch to it. The show has also picked up many awards. Hence Netflix has renewed the comedy-drama for another run.

There is an official release date. But we can anticipate that the fourth season will release in late 2020 and will have ten episodes like the previous seasons.

Join Sam on one last expedition.

Atypical will return for a fourth and final season. 🐧 pic.twitter.com/0IfN0fEIUG

Keir Gilchrist will return to play his character, Sam. Jennifer Jason Leigh, Brigette Lundy-Paine and Michael Rapaport, all of them, will be back to be Sam’s family once again. Rest all the cast members will be returning to reprise their characters.

Atypical has brought laugh, tears, love and lots of hugs for the audience. The emotional journey of Sam has touched every viewer, and he’s a favourite for them. It’ll continue to do so. Season three ended with a very emotional touch. Sam’s parents reunited after his mother, Elsa had an affair with a bartender. All of that is aside now, and they are back together.

Sam’s sister’s story ended with a very gutsy move. Casey had her first public kiss with her girlfriend, Lizzie. In the upcoming season, Casey will be more involved in the College in California. Since there is no trailer for reference, we don’t know what’s going to happen. But Sam will continue on his journey to find love. We genuinely hope that he finally finds someone that he’s been looking for all this while.